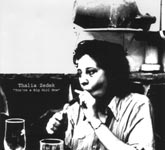 Thalia Zedek has been around for a while now, making music in bands like Uzi, Live Skull and Come. After making her solo record “Been here and Gone” she found time to do this EP.

“Everything Unkind” is a good place to hear her uniquely emotive vocals. The song is softer than the abrasive rock of her past and it suits her fine.

The cover of Velvet Underground’s “Candy Says” is lovely. Zedek really brings out the tragedy of the lyrics.

“No Substitutions” isn’t by the Velvets by takes inspiration from them. The music ebbs and flows beautifully as the song progresses.

The version of Bob Dylan’s “You’re a big Girl Now” is the standout here. I can’t recall when I last heard such an emotionally charged song sung with such fervour. I prefer Zedek’s full-bodied voice to Dylan’s nasal whine but that’s only half of it. (I respect Dylan as a songwriter, but can’t stand his voice).

The song is played with such urgency that it feels like it’s going to explode at any time. It’s a short, but masterful EP.