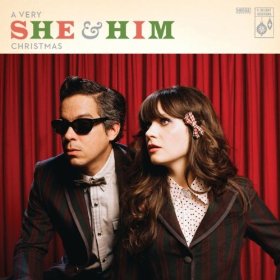 Album Name: A Very She & Him Christmas
Artist: She & Him
Year/Label: 2011 / Independent
[Buy at Amazon]
[Download at Amazon]
[Vinyl! at Amazon]

Just like you, I fell in love with Zooey Deschanel’s voice (and let’s be honest, her in general) in the scene in Elf where she’s singing, Baby it’s Cold Outside in the shower at the department store.

So when she began her musical career I was very happy. I have She & Him’s first album, but it didn’t grab me like I had hoped it would. I felt her voice wasn’t used to it’s fullest potential. Like it was being made into something it wasn’t. So I didn’t get their second album.

But when I saw that they had a Christmas album I was thinking, ‘finally, we’ll get to hear her like I wanted to!’.

Some songs put so much echo on her voice is sounds like she’s singing in a bubble. (Christmas Day, for one. I have to skip past this one).

Christmas Wish: I think I just don’t care for the song. I get that hey want it cheesy, but it’s like, above-[Carpenters]-cheesy. A bit much for me. I like M Ward’s voice so it’s not that.

While Baby It’s Cold Outside is on here, she sounds different than she did before on this song. Maybe it’s the absence of Will Farrell (I highly doubt it). It’s good, it just needs more lounge or something. It’s too rushed and echoey. I dunno. Personal taste and all that.

Have yourself a Merry Little Christmas is excellent. Her voice is perfectly matched to the arrangement, and it’s slowed down a bit from what I’m used to. It’s lovely.

I’ll Be Home for Christmas is nice too. I like the touch of the…is that a ukelele? See, this is a good amount of cheese.

Sleigh Ride is nice. They both sing on this one and sound great together.

I like the mournful Blue Christmas as well. See I’m not a total Grinch!

Even though I don’t celebrate religious Christmas, I do like Santa Christmas, and I like holiday songs for the most part. It’s always fun for me to hear contemporary people do old standards. So this is a good bet, especially for 5 smackers!* But I’d say for future releases, to turn down the echo. She has a good voice, it doesn’t need to be altered like that.

Though if you want the true Christmas spirit, the one I grew up with, pick up [Frank Sinatra].

1 comment for “Album Review:A Very She & Him Christmas by She & Him”