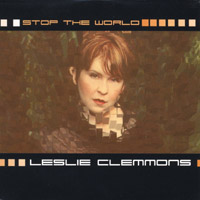 The CD starts out on a slightly funky note. Clemmons has a jazzy voice that would sound at home in a nightclub. Not the new kind of nightclub where everyone is drunk and they throw themselves on each other to the sounds of Britney Spears…but the old fashioned kind of nightclub, where the singer stands at the microphone in a long flowing dress and everyone politely sips cocktails and is enrapt by her.

But jazzy nightclub is not all Leslie Clemmons is capable of. The rest of the CD shows her pop sensibilities as well as her knack for almost showtune-y music.

“Stop the World” is immediately likeable. It reminds me of a few songs I liked in the early 90s, possibly Basia? The mind is fuzzy, but for some reason it takes me back.

She also takes her turn at pop with “Lie in Your Arms” which utilizes some strong guitar parts. “The Blind Lead the Blind” is also nice and upbeat.

All in all this is a nice recording of well written interesting songs.

Rating: 5 Stars
Ms. Clemmons seems to me to be one of those rare “pop” artists who is 95% artist, 5% commercial hype and marketing, as opposed to the other way around. Great integrity. Also a great label building a solid reputation for the real thing.
~Kay Sted (pseudonym)

Rating: 5 Stars
Leslie Clemmons has a clear melodic voice that is wonderful along with her songwriting ability. “Lie in your Arms” is definitely a song I will always remember and the whole CD reflects her amazing talent.
~Bernadette