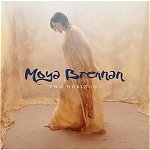 Well, I spent a lot of my college years listening to Irish band Clannad so I was pleasantly surprised to see that lead singer Moya Brennan had released her own CD.

I’m happy to report it is absolutely gorgeous.

If you’re not familiar with Clannad’s sound, think light airy vocals over rich, lush and beautifully arranged instrumentation. All with a Celtic twist. It’s the soundtrack to really good dreams. The kind you don’t want to wake up from.

Brennan’s voice is sweeping and haunting. The CD packaging is as beautiful as the music. The photography is stunning and the colors dream inducing. My only complaint is that it’s really tough to understand the lyrics unless you try really hard. But that means you can enjoy this recording on different levels. You can just listen passively and let the sounds wash over you. Or listen carefully to every nuance and every word. I believe you’ll be rewarded either way.

This CD would be perfect for those candlelit nights in the tub, or having a really romantic dinner….it’s very mood altering.

*I just found out that Enya is in fact, Moya (previously known as Maire) Brennan’s sister! And that she (Enya) was also in Clannad…I had no idea! Thanks once again to The All-knowing Ecto Mailing List!