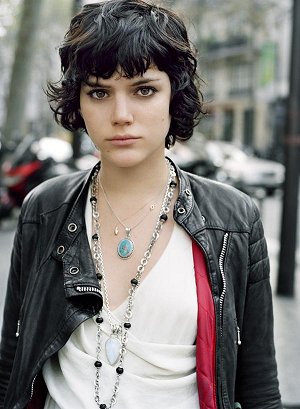 This weekend a friend of mine asked me about an artist (as in, do you know her?) and it was one I’d not yet heard of. Her name is Soko and she’s French. I guess someone called her the ‘French Lily Allen.’ So I checked out her music yesterday.

I have to say, she sounds nothing like Lily Allen (tho looks like her a little) but she’s cool. She’s more acoustic and soft. She started out as an actress in French films but became a songwriter when he had her heart broken. She currently lives in LA. She sings in English, at least some times.

She’s sold out shows in Denmark, so obviously I’d like her since I think I’m a misplaced Dane. Her Wikipedia page says she quit music in January of 2009 to return to acting. But Here’s hoping we’ll see her again.

The first song I heard was actually a video for “I’ll Kill Her” which is cute and disturbing at the same time. She’s talking about the woman who took her boyfriend away from her, naturally. It’s a cute sweet sounding song, but she’s planning murder.

So what do you think? Most of the other videos I found were fan-made pieces where they put photos over the audio. But at least you can hear them.

I haven’t figured out where to purchase her music yet.
I looked on Emsuic for her and there’s a Soko, but all the reviews say is “This is NOT the French girl.” So there’s another band out there with the same name. Both are shortened versions of their real names (she was born Stephanie Sokolinski but has been called Soko for as long as she can remember).