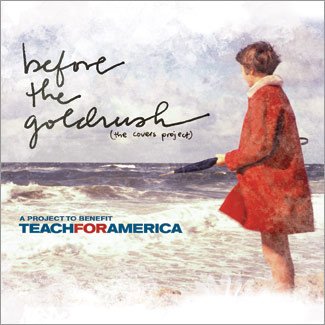 Louisville, Ky.—In a tribute to the great singer-songwriters who influence their music and the teachers who helped open the doors to their creativity, 26 contemporary singer-songwriters contribute recordings to Before the Goldrush, a new project benefiting Teach For America.

Before the Goldrush pays tribute to artists and mentors alike with a collection of tracks performed by contemporary musicians in homage to the singer-songwriters who inspire them. Contributions include songs written by James Taylor, Leonard Cohen, Tim Buckley, Joni Mitchell, and others who laid the groundwork for today’s generation of musicians.

“It’s rare to meet an artist whose creativity wasn’t buoyed by a teacher,” said Gary Guthrie, the project’s producer. “Whether it was an art teacher, band director, literature professor, speech coach, or the kindergarten teacher who told them that it was OK to color outside the lines, there’s usually someone who provided a key with which to open the artistic soul.”

A virtual open call was made to singer-songwriters around the world to participate in the project. Some are the children of teachers, some are teachers themselves, but all believe in the importance of great teachers in shaping the next generation.

Many of those in the participating musicians’ audiences are recent college graduates who have joined the Teach For America corps. Teach For America’s corps members commit two years to teach in under-resourced public schools and become lifelong leaders in the pursuit of educational excellence for all children.

Before the Goldrush features tracks from established artists and those whose work is gaining traction through touring and song placement on TV shows and in movies. A complete list of the artists and their tracks is attached.

I have heard this album and it’s very nice. They’ve done a great job of choosing great songs and great artists to cover them.

Some of the tracks I like the best are Little Green, by Alicia Dara. I didn’t know this original song, but it’s lovely and Alicia’s voice is gorgeous.

I also really like Pieta Brown and Neko Case so it was nice to see them on here.

Of course it’s really nice to hear one of my favorite Billy Joel songs again and Rebecca Elliot does a nice job with it. Quite different, but it’s a great song and it stands up to a makeover. (You’re My Home)

The Swell Season does a take on a Van Morrison song. Now I don’t believe I’ve made any secret of my distaste for Van Morrison’s music, but I adore The Swell Season so I’m going to go ahead and say this is good too. However, it’s live so it’s kind of out of place here.

This is a very nice compilation and it’s for a very good cause. Honestly, think about it. If everyone in this country were educated we wouldn’t have nearly the amount of troubles we have now.

← Album Review: A Demon and her Lovers by Jessy Greene
Album Review: Dark Developments by Vic Chesnutt and Elf Power and the Amorphous Strums →