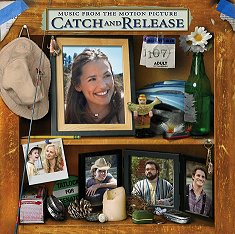 I adore Jennifer Garner (even though she married my movie star boyfriend – isn’t she the cutest flippin’ thing you’ve ever seen?) and I’m really looking forward to her new film, Catch and Release. I’ve got some goodies here from it.

Press release: When the fiancÃ© of a quirky young girl (played by Jennifer Garner) dies in a tragic accident during his bachelor party, and an equally quirky assortment of friends (including Timothy Olyphant in his first movie role since â€œDeadwood,â€? and Clerksâ€™ Kevin Smith) step into the picture to take up her slack, the result is Catch And Release from Sony Pictures, one of the most buzzed-about films of 2007.

CATCH AND RELEASE: MUSIC FROM THE MOTION PICTURE does justice to this bittersweet romantic comedy in a way that has already been compared to Garden State, whose every song was carefully woven into the storyline. Featuring â€™90s and â€™00s tracks by established bands (Gomez, Doves, Foo Fighters, The Lemonheads), major alternative darlings (The Magic Numbers, Joshua Radin, Death Cab For Cutie), under-the-radar indies (Blinker The Star, New Radiant Storm King, Audible, Peter MacLaggan, Alaska!) and more â€“ the new soundtrack album will arrive in stores January 23rd on Legacy/Sony Music Soundtrax, a division of SONY BMG MUSIC ENTERTAINÂ­MENT.

2. My Drug Buddy ~ The Lemonheads

15. What I Done ~ Andrew Rodriguez