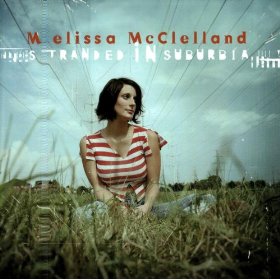 This post is serving as both a Spotlight, and an Album review.

I first heard of Melissa McClelland from Ecto (a music mailing list I am on). There was some discussion about her being married to Luke Doucet, who played guitar for Sarah McLachlan for many years. I knew this and that she was signed to the same label as Sarah, Nettwerk Records. But since I am usually so flooded with new music that I never have time to seek any out on my own, I never followed up.

Until, that is, I heard she’d be on the Cayamo Cruise. If you don’t already know what Cayamo is go [here]. Once I booked my spot on this cruise, I found it important to get to “know” as many of the artists as possible seeing as I’d be spending 5 days listening to their music. So I downloaded what I could from Emusic and Melissa’s album, Stranded in Suburbia was one of them (also Luke’s but that’s for a later post).

I love this record. It wasn’t an immediate crush for me. It took a few listens. With the exception of Glimpse into Hell, which I loved from the very first guitar note. It’s still my favorite on the album, but I’ve since also fallen for Rooftop, Jaded (in which she uses the F-bomb), Picture Postcard is a cool story song. Blue Farewell too. Beautiful.

There’s also a Bruce Springsteen cover (Factory) which I don’t love. But I didn’t really like the original either. I like The Boss, that’s just not one of his I ever really liked.

Her voice is nice and clear. There’s nothing very unique about it, but it’s lovely. And I love to sing along with these songs….at the top of my lungs…in my car.

I was expecting more mainstream pop or pretty layer-y McLachlan-esque stuff. It’s neither. It’s pop, but it’s more edgy. I can see it played on the radio, but (with the exception of the VERY mainstream title track, aka White Lies) only on really cool stations.

Her shows are one’s I am definitely going to try and catch on the cruise.

Note:I still am not 100% sure how this cruise works. I know I had to sign up for one concert slot per night but I’m guessing there are shows going on all the time that we can go to. If not, if we only get one show a day…I don’t know.