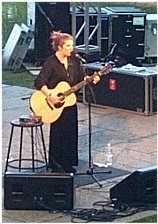 The show was held in the bird amphitheater so when they started the show a female zoo worker came out holding a bald eagle. She was doing her little spiel about how we should all come back another time (when the zoo is open) to watch bird shows. As she was talking the bird took/left a huge dump behind her. We all laughed and she made some joke about it being a show about the nature of things or something.

Dar came out and the first thing she said is, “Well…the bird pooped.” and threw up her hands.

She began by saying that when she was growing up there was someone in her life that was really cool, a hippie, and would let she and her sisters cook anything they wanted. Sometimes they would make doughnuts shaped like butts. Then she said, “This was NOT my mother!” It was my babysitter and went into “The Babysitter’s Here”.

I did see some folks singing along with her but mostly the crowd seemed to be unfamiliar with her music. It was interesting to see where people laughed during the songs. Sometimes at things I didn’t think were necessarily funny but more sweet or poignant.

She then spoke about an artist who was popular when she was in college and how she was blamed for breaking up her husband’s band and went into “I Won’t Be Your Yoko Ono.”

Dar mentioned that today was supposed to be a voluntary rolling blackout. In protest of the way the present administration is dealing with energy everyone is supposed to turn off all electricity from 7-10pm (wherever they live). She said that although she wasn’t personally participating, she thought that we should all get on our cell phones, call the babysitter or roommate at home and tell them to turn off all the lights, light candles “Everything’s OK, just do it”. Then we should wait about 15 minutes, call back and say, “I know what you did last summer!” Or have the operator call and say, “It’s coming from inside the HOUSE!” She called it an Adventure Blackout.

“If I Wrote You” was next. She didn’t introduce this song much.

She said, I’m going to do a holiday celebration song. I know it’s not the time of year, but…” Then she told us to imagine someone who is preparing for his niece to come visit from Brainerd University (we have a Brainerd here but it’s not a University, but she was trying) with her…um…”friend” and she is a…ummm…vegetarian. And she likes this stuff called ‘hubris’, no that’s not it, ‘hoomis’ and it’s beige…and I’m going to go down to the Seward Co-Op and see if I can find some…and some of that pitta bread…and we have to get the two twin beds made up…even though they’d probably ‘make do’ with the one double bed…” etc. it was very funny and had everyone laughing. Then of course, did “Christian and the Pagans”.

She began talking about how when she was little she enjoyed waiting at the bus stop and there was always this ‘bus stop mom’ (You know which song is coming don’t you?) and how she always had everything you might need in her coat, “a cough drop, a Kleenex and perhaps after the bus left…a cigarette?” And when she was old enough to go to that bus stop she was very excited. “It Happens Everyday”.

There was a time when she was driving through Iowa and the hilly landscape really caught her attention. She said it was very curvy and reminded her of, and here she was dong the hourglass/woman gesture as if she didn’t want to say then she just said, “You know, boobs.” She thought it made you sort of take a step back. She said “I placed sort of an uptight narrator in that scenario so see what would happen”. This song could have been called almost anything, but she was in “Iowa” so that’s what it was called. She did say that it could not be called Wyoming because the “Grand Tetons would be just TOO much!” Toward the end of the song she said, “Since 98% of you are already singing let’s just get the rest of you going.” And we all sang the last two choruses with her. That was surprising to me but at this point I realized that a lot of people were there for Dar and not for Shawn Mullins.

“After All” no introduction.

“As Cool as I Am” which she dedicated to the female Zoo workers.

When Dar was little she was always into scaring her family. They used to take the kids to a place called Breakneck Ridge. “Don’t ever take your children to a place called ‘Breakneck Ridge’ that’s horrible!” She would do things like run up to the top of the ridge before her family got there and pretend to fall off and they would all look at her with horrified faces. She said she thought they were playing along because, ‘how many times have they seen this before?'” So she was thanking her family for letting her be so macho. “When I was a Boy”

Dar left the stage and the audience went nuts, jumping to heir feet for a standing ovation (first time I’ve ever seen this for an opening act). She came out right away and said “I took the chance that this is what you meant, but I have to leave enough time in between (acts) for clean up because Shawn will NOT stand for this!” and she gestured over her shoulder to the eagle poop.

Encore: She said she wanted to play a song with a nautical theme because there was a pond right behind her so she chose “We Learned the Sea”.

It was a wonderful, and intimate show. I noticed that quite a few people were leaving when we were too (and the zoo had been closed for 3 hours) so we weren’t the only Dar-only concertgoers.