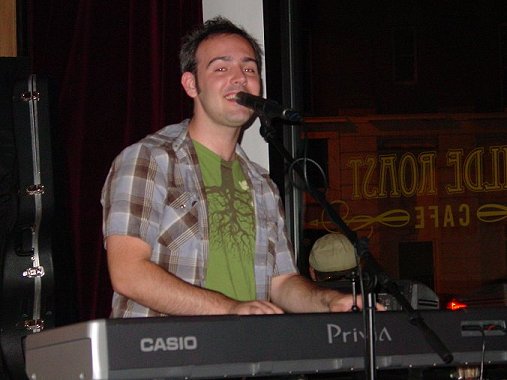 Though it was strange to see Gregory play when it’s not in my living room, The Wilde Roast Café is a really nice place. It’s based on (can a café be based on something?) Oscar Wilde so as you may guess is a very gay friendly atmosphere. But that’s not to say us straighties feel out of place. Not at all. It’s very warm and welcoming. And the food is delish. You have to love a place that had its chocolate cake on the cover of Bon Appetit, right?

There weren’t a lot of people there when we arrived and when Gregory started to play many folks were not paying attention. But by his, oh, third song, everyone was watching or at least tapping toes and bobbing heads while typing away on their laptops. Then clapping appreciatively after each song.

There was one man who looked at first to be there doing work. He was very studiously typing away on his laptop and sipping coffee. I assumed he would be more annoyed than excited about there being live music that evening. But at one point I looked over at him and he was singing along!! I fan! Yay!

More people starting filing in (maybe not certain that he would have started on time?) and pretty soon the place was filled with fans. New and prior.

It seemed everyone was there to see Gregory whether they came in that way or not and all attention was on him. Well, except for the woman who kept making very loud, obnoxious googly noises at her kid though out the show, even the quiet parts. I swear some people do not know how to act in public. Some people’s kids…and I’m speaking of the mother. It was very distracting both to Gregory and to us. But he went on like the trooper he is.

It was a wonderful show and we got to hear some of the new songs. I got a copy of the new CD, which I love, and I’ve reviewed it here.

Gregory stayed with us while he was in town and I snapped a photo of him playing my lovely old piano.

← Album Review: Adrian For President by Adrian and the Sickness
Feminine Groove show on Engage Radio →