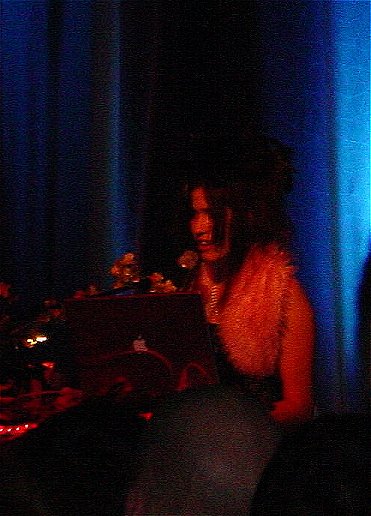 Firstly, I must say that I was amazed at the turn out for this show. I heard it was sold out (which makes me very happy for the artists) but I didn’t realize the Varsity Theater could hold eleventy million people.

We drove by the side of the venue and could see that there were quite a lot of folks standing outside (this was 30 minutes before the doors opened). But we didn’t realize until we walked up to the venue that the line was not only in front of the venue, but snaked all along the side of the venue, turned left and went the length of the parking lot behind it. The show was 18+, imagine if it had been all ages!
The Varsity is a beautiful place. I was there to see Charlotte Martin a few months ago. But this time they took out all the comfy chairs, beds and table/chair set-ups in order to accommodate the mob.

So once in we staked out our spot near the back (because the front was sardine-like and it was hot with a capital H in there). The camera angles were not the greatest but it would have to do. There was no way anyone would let me in up front. Cameras were not allowed, but because I had a photo pass I could bring one in. Though the women standing next to me were quite vocal when they saw me taking pictures (“I thought we couldn’t bring cameras in here!”) whatever, I didn’t feel the need to explain myself to them.

Zoë Keating (from the band Rasputina) opened the show. A nice little touch was that Imogen came out at the beginning to introduce her. The crowd went berserk.

I have to say that I was very impressed with the crowd for paying attention as well as they did. Zoë’s music is great. It’s beautiful. But it’s instrumental cello…nothing else. Well, she does have a loop station that she uses to record cello parts and there’s a little thumping on the body of the instrument, but there are no vocals. As my concert going companion said, ‘this sounds like it should be in a really moody movie, but is hard to watch live’. I think it’s great background music, but it does not really require visual attention. I kind of wanted to close my eyes and fall into the music. But I was standing up and that would have been a mess.

The cello is a beautiful instrument and I really enjoyed hearing Zoë play. But most people were there to see Immi. And judging by the look of the crowd, which was mostly gay men wanting to dance, I am guessing this is not how they wanted to start out the evening. But they were still very respectful, listened and applauded (even hooted at times). A lesser cello player would not have held the audience’s attention as well as Zoë did. Bravo to her.

After a short break Imogen came out. Crowd=berserk again. When she got there she was holding water bottle in one hand and hairspray in another. She said she’d gotten them mixed up back stage. My fellow Minnesotans were heard throughout the night saying “What did she say?” in really bad British accents. Come on people, get out more.

She began with “Just for Now” which was just vocals, sampled and mixed all up. Sounded great.

Next was crowd favorite and hit song, “Goodnight and Go”. A few minutes into it she coughed, quite animatedly. She stopped apologized and explained that she already has a bit of a cough, but then the corset she was wearing was so tight it was making her cough more. I don’t know why I found that funny, but I did. She started the song again and completed it sans coughing.

The rest of the show was just as great. At one point she found a spider on her laptop. She kept pointing it out to us. Most of us were lucky if we could see her, let alone a bug crawling on her computer, but it was pretty cute.

It was at that point I attempted to crush through the crowd and get up close enough to get a good photo or two, but since everyone is at least a foot taller than me, it wasn’t to be. At one point I got her in my frame and that’s when she dove behind the laptop in fear of the spider.

So I’m afraid my photos are not great. But I was there, I took them, I listened I loved her performance.

If you get a chance to see her live do it, you won’t be disappointed.