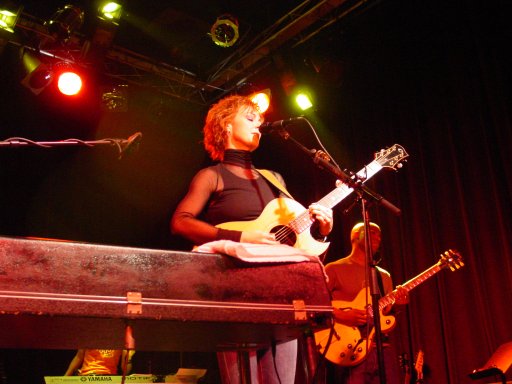 We’d ordered seats where you pay a little more then get dinner included.* This assures you that you’ll be seated at a table instead of having to stand or take your chances on getting one of the non-reserved tables. We decided to splurge and boy, am I happy we did!

We got there and I knew from when I ordered the tickets that we’d be on the balcony, somewhere in the center at a table for 5 with three people we didn’t know. Well, we got there, went upstairs and there was no table 84. So we went back downstairs and sure enough there was table 84 about 2 feet from the edge of the stage!** I think it’s safe to say I was the one fan that closer to her than any person in the joint. I could almost see up her nostrils. If she’d had something in her teeth I’d have seen it. I couldn’t have been happier!

Already seated at the table were two lovely women (big fans) who were just as excited as I was. One woman looked very familiar to me, but since I’m shy (honestly, really I am) I didn’t have the guts to ask her and try and figure out if I knew her***

We chatted a little and I had though that there would be an opening act. Nope. 7:30 came and Jonatha and Band walked about and began playing.

Better After All
Crumbs
My Last Innocent Year -because she just turned 40 and loves it. Has been waiting all her life to be 40 “because nothings better…”
Red Dress
Steady Pull (with Goffrey Moore doing the Michael Franti part)
Because I Told You So
God Only Knows (on piano)
Deny She said this was written for a film directed by Christopher Reeve called “In the Gloaming” about a man dying of AIDS who went home to visit his family and try to make peace with them…it wasn’t used.
Inconsolable (the saddest song ever)
It Matters Now (also on piano)
Room in My Heart
Is This All? (“inspired” by OJ)
Back in the Circus She said she performed something called ‘Damn Everything But the Circus’ as a dancer (modern) she was the ‘trapeze carnie whore’ so she was revisiting that character.
Fire & Rain (on piano)
The Choice
Landmine (rocked out big time on this number)
Everything I Wanted- She said this was her her wedding song.
Linger
END

1st Encore:
How Deep is Your Love started with ‘Stairway to Heaven’…when she gets there she knows if Gucci is closed…) she said this is a big hit in Latvia. Where Anne Marie studied piano. People cheered and she said, ‘that was a joke.’ Then someone shouted ‘Freebird!’ and Goffrey started playing it. Then Jonatha started singing “Landslide”.
So Much Mine -Inspired when she was a nanny for two little girls and not too far away from where they lived you’d see girls not much older than them selling their bodies on the streets. So this song is from a parent’s point of view what happens when a child leaves you, or becomes something not expected.

2nd Encore:
Just came out alone and sang “No Net Below”. She loves this song. She was lovely, gracious, funny, charming smiley and wonderful.
*Our server told us that the reason for the table move was that they had a large party of record label executives that wanted in, so they put them all up on the balcony together and moved a bunch of us ‘little people’ downstairs. When we were up there looking for our seats the tables had notes on them that said “Reserved-Rains” and I know that her management company is Patrick Rains & Associates, Inc. I had thought maybe someone was courting her but maybe not.
**Another strange note about the Fine Line. Because you get dinner included you end up sitting there eating while the artist is playing. This might not seem like a big deal when you’re 200 yards away from the stage but when you’re two feet away it’s embarrassing. I kept thinking she could smell my chicken wings and felt like the band was watching me eat, so I just nibbled. I didn’t want to make her feel like she was doing dinner theatre in the suburbs.
***We figured out later that she was Mary Jane Alm. If you’re not a Minnesotan that might not mean much to you, but around here she’s kind of a local music legend. Good thing I didn’t try and figure out if we knew each other, we’d never met before! I knew who she was because I used to work for an Event planner in the cities who booked her a lot.

← Album Review: Crack it Open by Ina May Wool
Album Review: Luckyday by Rachelle Garniez and the Fortunate Few →