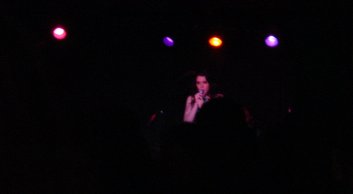 Well, doors opened at 8pm and we got there at about 8:15 and the place was already filling up. All the seats were taken but we found a table to lean on. The music started a little late (as usual) so at about 9:20 or so the first act came on which was neither Leona Naess nor Josh Rouse. I have no idea who she was because she spoke so quietly and that combined with the fact that everyone around me was more involved in their own LOUD conversations than the music, I couldn’t hear a word she said through her entire set. I don’t think she could hear herself either as she often went off-key. She did ask to have her monitor turned up at least once. I felt bad for her. She only played for about 20 minutes. She was cute, looked like a more glamorous Pat Benetar.

I really had no idea who would be the headliner on this evening. I had never heard of Josh Rouse so in my mind Leona Naess should have been the headliner. But I realize that being surrounded by female-lead music has given me a skewed view of the world. As it turns out probably 85% of the folks in the room (which was packed…SOLD OUT) were there for Rouse.

So Naess was the first full act. She opened with “He’s Gone” which was a great way to get the crowd behind her. It’s maybe the peppiest song on the CD (which is beautiful but very mellow) and it sounded fantastic live. In fact, all the songs sounded better live, and I for one, liked them to begin with.

I did not keep a set list as I forgot a pen (doh) but everything she played was from the first CD except one cover , “Ooh La La” (You know it, it’s the one that goes, “I wish that I knew what I know now / When I was younger”) and her encore which I believe was her song, but was one I was not familiar with.

After the show I went over to her and introduced myself saying that someone who works for her sent me an advance copy of the CD and I did a review for my site. She said, “Was it a good review?” I said that of course it was or I wouldn’t be there. I handed her my card and she put it in her pocket and said “I’ll have to check it out”. By the time I got back to my table my husband who was watching her said, “She’s writing on your card”. I don’t now if that meant that she was making a note for later reference or signing it to give it away. Oh well. She seemed nice. It was a very good show and I’d recommend seeing her live if you get the chance.

We stayed for about 3 songs of Josh Rouse. I enjoyed his music, but then again I was a child of the 70s and liked the music of that time…my husband did not.