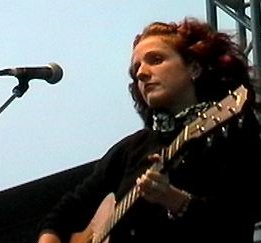 Review by by Erica Rose

This was the sixth time I saw Patti Griffin perform and each time has been a unique experience. From the intimate solo acoustic performances years ago at the Tin Angel promoting “Living With Ghosts” to the full-rocking band shows on Penns Landing promoting “Flaming Red”-this show was a delightful hybrid of her earlier performances.

Promoting her newest release “1,000 Kisses” it was obvious that Patti has a dedicated audience here in Philadelphia. The crowd called out requests from this new album as well as from her previous releases.

She was backed by the competent and artistic musicians that appear on “1,000 Kisses”. Co-producer Doug Lancio played electric and acoustic guitars and mandolin, Brian Standefer on cello and Michael Ramos on piano, keyboard and accordion and of course Patti on acoustic guitar. Notice there was no drummer in the band. This arrangement suited Patti well- allowing that unmistakable alto voice of hers to rise above the music.

She mixed things up by doing some songs by herself. Of note was an absolutely beautiful version of “Moses” and an equally moving version of “Not Alone”. Then Doug Lancio joined her onstage with his electric guitar and together they did a stripped down, anguished and soulful version of “Flaming Red”.

The full band joined her again; Patti put her guitar down and let the band cover the groove while she sang an incredibly emotional “Tony”. I looked around and there wasn’t a dry eye in the theater–including my own. Other highlights included “Let Him Fly”, “Be Careful” and “Long Ride Home” which Patti attributed to the purchase of an old guitar which she claims “wrote the song itself”.

Patti further thrilled her fans by coming out for 3 encores. Including a touching version of “Mary” dedicated to her sister (who lives in Philly) in her Grandmother’s memory. She ended the night with the title track of “1,000 Kisses”, sung completely in Spanish, which translates to “Mil Besos” as it is called on the album.

Patti left the stage smiling after her finale to a cheering, standing ovation.