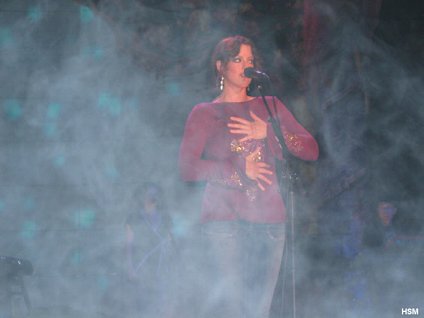 Well, I don’t even know what to say…I had incredible seats. I bought them through the fan club so I knew they’d be good and in fact, believed them to be in the first 10 rows. But I had no idea I’d get 2nd row center. Sigh.

Sat next to and amongst other fan club members so it was nice to be in “like company”. Well, except for the two obscenely drunk women sitting right in front of me. At one point I leaned over to a woman next to me and said, “Why would someone pay $130 for tickets and then be so drunk off her arse she won’t remember a thing?” and she said she heard them say they won them. So any of you who had crappy seats and really love Sarah’s music, you can be real resentful of these two drunkards who didn’t even care enough about Sarah to purchase tickets and they got the best seats in the house. Bah! Life’s unfair.

Sarah’s opening act, Butterfly Boucher was very impressive. I had only heard one song of hers previously but I had heard the buzz that she was very good. The buzz proved to be true. Her style is pop, good solid, perfect pop. Smart, funny, energetic, just a good time.

She told us how the previous night in Milwaukee she sold the most CDs of anywhere on tour and this was her last American show of the tour. She challenged the audience to “out buy” the Milwaukee show so that we could hold the record (her guitar player even said that if we broke the record, the Vikings would win the Super Bowl…but we know that won’t happen). She did it in a very witty and charming way (that Australian accent didn’t hurt). I heard a day or two later that she sold out of all her CDs. All of them. So I’m guessing we broke the record. Good for her!

Onto the main event: Well, if you know anything about me, or why I built this site then you know my love for Sarah’s music. So let’s just say she was perfection. I’ve seen Sarah perform all but one time she has graced this state and I’ve never been disappointed. The only thing that would have made this show better would be if she had done some songs from Solace. I know she has such a large catalog that if she played them all I’d still be sitting there. Which would be fine with me, but might be trying for the band. But I’m of the Solace-is-better-than-Surfacing School of thought. No matter, she played some “Fumbling…” songs so I was happy.

Her voice is angelic as usual. She didn’t talk too much, probably has run out of stories after being on the road for a long time. But I kind of missed that. I know she’s a pretty witty storyteller and was hoping to hear more, but she was very gracious and seemed to be having a good time.

I only teared up a couple of times (usually I spend the whole show in tears) and that was when she played “Fear” (I can’t even listen to that on record without weeping) and when she played “Ice” (ditto). Chill-inducing for sure.

I didn’t take any photos because I didn’t think they’d let me in with a camera, but others brought them so I guess it would have been OK. Kind of bummed because with the seats I had I could have gotten some amazing shots.

This site has photos, some are a little blurry, but I guess this is show The Drunk Girls remember the show.