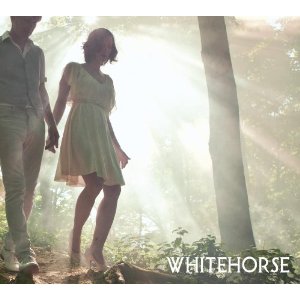 ix Shooter Records’ Melissa McClelland and Luke Doucet tie the musical knot with the debut of their new band, Whitehorse, marrying their talent and chemistry on stage as a smoldering duo. Gutsy and resolute in their pursuits of sound and substance, Luke and Melissa’s fusion of the personal and professional brings to mind the road-tested romance of Johnny and June.

See a preview for Whitehorse

This fall, Whitehorse breaks headlong and heartstrong in pursuit of it all, cards on the table, everything on the line. Luke and Melissa figure the odds the way travelers count miles, undaunted by twists and turns of luck and road, so let dice and wheel roll.

Whitehorse’s debut album will be released in the USA on October 18, 2011 on Six Shooter Records.
But I think you can get it sooner via [Amazon Canada]

One of the songs they do was originally on one of Luke’s solo albums, and it’s actually one of my favorites! [Listen to Broken]