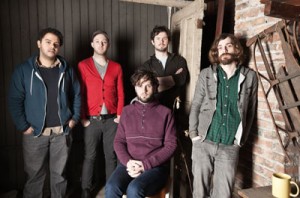 I just heard these guys and I really like them! I wonder where I’ve been, as this is their 4th album.

Since the 2007 release of Welcome to the Night Sky, which earned the band both a Juno Award and a MuchMusic Video Award, Wintersleep has performed hundreds of shows including sold-out headlining dates, an opening slot for Sir Paul McCartney in Canada, a US tour with Wolf Parade and a three month long European tour with Editors and have just embarked on a US tour with The Hold Steady. As a result, the songs on their newest offering New Inheritors were essentially born on the road, showcasing the band’s range, scope and sophistication. Now the band is happy to announce an extensive Canadian tour to take place immediately following their US dates with The Hold Steady

They’re offering a free MP3 of their song, [from the album New Inheritors]on their website