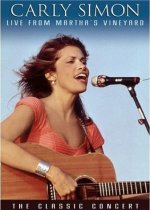 Wow, is this DVD ever a blast from the past. When I first put it in, I thought ‘man; she has not updated her wardrobe in like 20 years’. Then I realized everyone else was wearing the same style. Then I looked at the back of the case and realized this is not a new concert. This is a concert that occurred in 1987, was filmed then and is only now on DVD. Whew, I thought I was losing my mind! You might think I ought to infer that from the title, “The Classic Concert” but to be honest I don’t think I even saw that. I just popped it into the player. I look at and hear lot of stuff, give me a break…

Anyway…that being said, this was entertaining. Carly Simon is a legend in pop music. We all know that. She’s fabulous. She’s a fantastic songwriter, entertaining to watch and has a gorgeous voice.

The DVD has a lot of extra features as well as the concert. There is an interview and behind the scenes stuff as well as a scrapbook of photos and a discography so you can go to Amazon and buy all the CDs that are missing from your collection.

If you are a sometime Carly Simon fan or only really like her really old stuff (70s not 80s) then this might not be a must have. But if you are an avid fan you will want this. But then again you don’t need me to tell you that.