An Interview with Andrea Florian by Collected Sounds 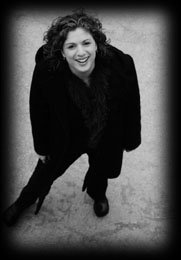 Where are you based?/Where did you grow up?
Toronto

Tell us a little about how you got interested in music and when you started writing/playing.
I started taking piano at about 6years I guess.. (I begged my folks for lessons and would wake up at ungodly hours to practice…. A very abnormal child some would say!).. I’ve been singing for as long as I remember speaking.. in younger years I joined various children’s classical choirs and growing up I always took part in all the school musicals.. in university I found a better space for my voice and felt like it was time to start really writing…enter cd #1… and I was off.

Describe your first performance (time, place and any feelings that went with it).
Umm.. nervous a little? Excited mostly… it was in December 95?!.. time flies.. I can’t remember the exact date.. that was my first official show.. it was at a crappy little hole in the wall at queen west of Bathurst in Toronto… the only place that would take an unknown gal such as myself.. but my first REAL performance was in highschool at one of your good old talent nights.. I got up and sang one song and wasn’t nervous really… but probably totally in my own world.. I’m not sure if I ever even looked at the audience!

How would you describe your style of music and who are your musical influences?
Hmmmmmm.. this is always a tough one.. storytelling is something I always say… folk… I love the idea of folklore and stories and legends and history being passed down through songs… I’m influenced by so many things really… there was a time when I really wanted to be a jazz singer so it was Anita O Day.. but I love piano.. so Kate Bush, Tori Amos.. Sting is so amazing and versatile.. Jane Siberry is daring and free and I truly admire that.. Neil Finn is my absolute fave though (!)

1. What is the best feeling in the world?
Feeling free/strong/ confident/having your eyes open to notice all the most amazing things..
2. What is the worst feeling in the world?
Feeling closed or trapped, financially or otherwise… judging yourself too harshly for simply being human .. I beat myself up too much(!)
3. What is your favorite beverage?
Hmm.. in the summer.. oj and cran juice mixed together.. winter.. Starbucks chai latté .. yUMMMY!
4. What is your favorite word or phrase?
No worries (!).. I like to call people pet names.. tease them.. ‘freak”.. oh.. when people say “take care”… I think it’s sweet
5. What is your greatest accomplishment (so far)?
Probably touring in Australia.. I’m not really sure.. everything feels like a blur sometimes.. with music there’s been so much… sometimes I think the greatest accomplishment is when I actually stop long enough to enjoy it for a brief second or two!

← Album Review:Solid Poems on a Ghost of a Subject by Siren Circus
Album Review: The Nymphaeum by Angelwing →