An Interview with Catarina Raposo of Dwelling by Anna Maria Stjärnell 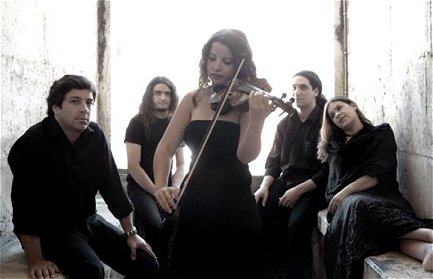 What are your musical influences?
Personally, my influences are very wide. I usually say I like good music, well played and well sang, and of course, that I find it moving. So I bring to Dwelling a bit of Bossa Nova, a bit of Jazz, Soul and of course a taste of Fado.

As a band we are very eclectic, because we are 5 elements with different backgrounds. Silvia, the violin player has classical influences and she used to play in a Celtic band; Nicholas, one of the guitar players, has also a classical training and his influences come from Hard Rock; Jaime, the bass player comes from a heavy metal background; and Nuno, the other guitar player used to be in a Black metal band and his influences go from Jazz, Ethnic, Gothic, Metal, Fado. So, together, we have very varied influences.

How long have you been playing together?
Me, Silvia Freitas, Jaime Ferreira and Nuno Roberto, are playing together since 2000, along with Helder Dias. This formation recorded “Moments”.. Nicholas Ratcliffe joined us shortly before the recording of “Humana”, in 2002, when Helder left the band.

What is your audience like?
I’m happy to say that we have very different audiences. We.ve had good feedbacks from all kinds of people, and all ages, but I’d have to say that we have had a very big support from people involved in the dark underground culture.

What will your next album sound like?
Our next work is still under construction, but we are thinking of introducing a Portuguese guitar in some songs. Naturally, there will be some differences and we hope that our experience with “Humana” will help us grow as musicians. So I think our next work will sound like Dwelling, but I’m quite sure it will allow us to show different moods.

How would you label your music?
I don’t like to label it and it’s quite difficult for me to do it, but I can say it’s acoustic, a bit nostalgic at times, emotional and sweet. Maybe it is somewhere between classical music and progressive contemporary music.

When did you first realise you wanted to be in a band?
I didn’t!!! And to be honest, I never thought of it before I joined the band. I played piano for 10 years, and every year it became harder and harder to face an audience. When I was invited to sing in Dwelling, I was quite surprised, since I had no experience. But I can assure you, I realise now, there’s no other place I rather be!