An Interview with Emaline Delapaix by Collected Sounds 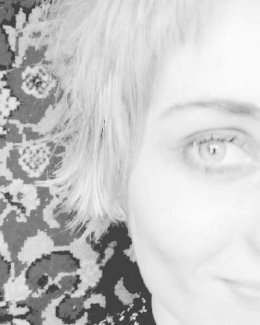 Where are you based?
Melbourne Australia

Where did you grow up?
New South Wales and Melbourne Australia

Tell us a little about how you got interested in music and when you started writing/playing.
I started writing stories when I was about five and completed my first short movie script at age 15. Music began taking over from about then and I started to put my stories into poetry and song and made a firm decision (to the school guidance counsellors dismay) that I was going to be a singer/songwriter/performer. First trashy band at 18, second less trashy band at 20 and finally getting to do what I really want to do 5 years later.

Describe your first performance (time, place and any feelings that went with it).
With my trashy band at someone’s house at 18 years old. Lot’s of young girls who thought we rocked as we were an all girl band. think Courtney Love meets Tori Amos (a scary though I know). I was really nervous but thought I was pretty cool afterwards when everyone liked us. It was fun but I could never do that type of stuff now.

How would you describe your style of music and who are your musical influences?
Arrggh that question!!! Ok so what I normally tell people is I have piano, violin, viola, guitar, accordion, percussion, trumpet and also as of March electronic beats. It’s lush, can be folky, can be alternative but always diverse and we surprise the crowd by throwing in styles and songs you wouldn’t expect like bluegrass! I would say I have been heavily influenced by Kate Bush and Tori Amos as well as Neil Finn, Billy Bragg, Bjork, Ani Difranco and lot’s of lesser known but equally amazing musicians such as Stina Nordenstam, Anja Garbarek, Split Enz, Ruby and loads more. I’m pretty much influenced by what I listen to whether it be folk, electronic and even ragtime.