An Interview with Gabriela Kulka by Anna Maria Stjärnell 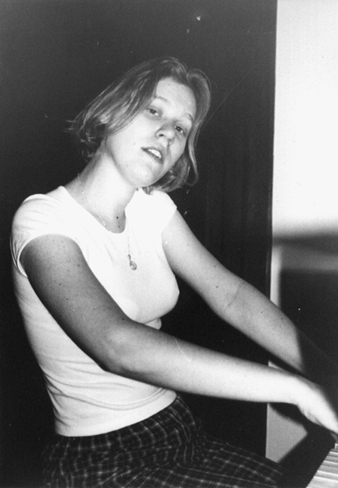 Polish singer Gabriela Kulka makes piano-based music in a very intriguing way. Her demo CD-R includes her own songs and covers of songs by Iron Maiden’s singer Bruce Dickinson done in a unique way. The standout of these is “Tears of the Dragon” which also has some lines from Tori Amos’ “Caught a Lite sneeze”. Her website has more covers by Dickinson and some of Kate Bush as well. She recently released a CD called “King of Rats” via mp3.com. I asked her a few questions.

How long have you been writing songs?
To the best of my knowledge I began to write about four years ago, although I can’t remember precisely. I had my moments of joyful creativity times before, like when I attempted to teach myself to play guitar (with minimal, but occasionally useful results) a couple of years earlier – so I was always “into” music in one way or another. I played violin in grade-school, then came the whole guitar infatuation, learning Alice Cooper and Brian May songs etc. But the first song I actually wrote myself was in fact done with the help of the piano, and I remember being totally chuffed that I (apparently) single-handedly spawned a new creation that could stand for itself, had its beginning, middle, end, had its inner logic. It seemed almost supernatural to me then, in a gleeful, childish way. 😉 A rabbit out of a hat. It was called “Brother Wizard” and I’d like to think it stood the test of time considerably well. I was hooked from then on. There’s nothing compared to the feeling when a song starts to take shape.

What drew you to Bruce Dickinson’s music?
Power and beauty? I didn’t hear much Iron Maiden before I “discovered” Dickinson.. I had a vague memory of watching the video to “Tears of the Dragon” somewhere around 1994… but I only “remembered” the man some 4 years ago, the larger-than-life multi-talented fencing-flying-air-raid character that he is, just as I began to feel my way around heavy metal music – and thank God I found “Chemical Wedding” because it made me fall in love with the heavy aesthetics as such, although I haven’t found any album yet that would equal it in its mastery. To put it simple: it was a revelation. Few can conjure a feeling of elation and shivers-up-your-spine like this crew. The lyrics, both sharp and poetic. Bruce’s voice is amazing, and what’s more – he is an excellent songwriter, always has been, so are Roy Z and Adrian Smith …that’s why I think it doesn’t hurt the songs to translate them into a non-metal arrangement.

What else do you listen to?
I wouldn’t frown at any particular genre; it’s a question of what sparks my interest at the moment. I listen to a lot of heavy music, Alice Cooper, Megadeth, Halford, Iron Maiden but I most of love the classic singer/songwriter stuff. Kate Bush, naturally. Tori. A lot of Joni Mitchell, Suzanne Vega. Plenty of Björk, who is my favourite sound craftsman(woman) alongside Peter Gabriel. I’m a huge PJ Harvey fan. I think I could name on and on and on and it would be just an endless litany of artists whom I find inspiring, from very alternative to unabashedly mainstream. I seriously dig musical theatre. I love Sting, Rasputina, Queen and Brain May, I adore Laurie Anderson, Patti Smith (best live-show ever), Fleetwood Mac, A Perfect Circle, David Bowie, Fiona Apple, Diamanda Galas…. On the more classical side, Prokofiev… all in all it’s really a huge, exciting field to explore and I love the sense of adventure in discovering new sounds through all the indirect linking and scattered credentials.

Will you do a tour?
I would love to. For now I’m mostly locally active, cafes and clubs around Warsaw. I’m for most part unknown to the general public, but of course my efforts are to change that. 😉 So if anyone would put me on a bus and give me a few bars to play around Europe, I’m more than ready…

What’s your next project?
I’m writing songs constantly. Not exactly at a lightning-fast speed but there is always commotion, there is always a number of them incubating. The demo is, after all, a loosely connected best-of sorta collection, but I keep writing and recording, improving my skills at both, so, in a way it’s hard to say precisely what the next *project* will be. I hope it’ll involve polishing up a number of tunes for commercial release. At the same time, there is a number of side-projects like a tribute album, which is still a bit of a secret, but I’ll possibly, maybe, probably participate in it, I’m also writing lyrics for another performer at the moment, which is exciting because it’s very far from my own musical roots…aaaand soon might be doing vocals on yet another friend’s project. So thankfully there’s a lot going on.

Do you have many fans?
Let me put it this way: I feel I do. 😉 There is no official data, as you may imagine but more often than not I’m grateful for a surprisingly good reaction to what I create, from often unexpected sources. The majority of my music’s traveling to people’s homes is, so far, via Internet, and I receive a heart-warmingly positive feedback from a lot of online acquaintances and friends. And then there’s a fierce little army here in Warsaw and Poland. Not large in numbers but the energy…. man!… Some might tell you recognition doesn’t matter much, but it’s a lie, even on the minimal scale I am experiencing. A pat on the back in the right moment is what pushes you forward sometimes. You can’t be dependant on it, but it gives you that extra energy-injection.