An Interview with Jessica Weiser by Collected Sounds 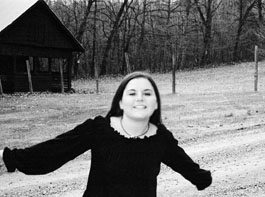 Where are you based?
New York, NY

Where did you grow up?
I was born in Mechanicsburg, PA and when I was 9 moved to Fishers, IN.

Tell us a little about how you got interested in music and when you started writing/playing.

I’ve been singing my entire life, basically… When I was 9 years old my grandmother died and left me her baby grand piano… I started taking piano lessons then and continued for a few years, but then quit because I wasn’t very good about practicing.

Even though I wasn’t taking lessons I’d still sit down at my piano when I was bored or unhappy and just make up these songs… I don’t know where they would come from, but I could sit there and play whatever came out of me for hours.

Shortly after I started writing lyrics (I was minoring in English and always liked writing, anyway) and about 8 months later I was on a plane to Vancouver to record my first album with a friend!

Describe your first performance (time, place and any feelings that went with it).
I think my first REAL performance… playing/singing was in my parent’s living room. I had a living room concert and invited a bunch of friends.

It was the first time I had played my own material in front of people. I was really nervous, but at the same time, I knew deep down that night that I wanted to perform all of the time.

I love connecting with people in that way.

How would you describe your style of music and who are your musical influences?
Style is rock/pop and I think you can probably hear a little bit of Sheryl Crow, Sarah McLachlan, Neil Young in the songs…

I have a wide range of influences and listen to everything from Beethoven to Dave Matthews Band… some of my favorite artists include Patty Griffin, Ani Difranco, Radiohead, Fiona Apple, Tori Amos, etc., etc. 🙂