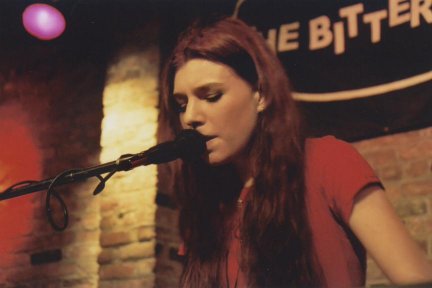 To be true to one’s highest destiny in the face of all obstacles is the greatest of aspirations. It requires tenacity, passion, faith and the simple, unwavering belief that the journey is not only worthy, but necessary. It provides the challenge— and opportunity— to be all of one’s self. The music of Marina V exemplifies the beauty that comes from following a dream and discovering yourself along the way.

Born and raised in Russia, Marina realized the importance of having the freedom to live your dreams and to think for yourself early on. “I grew up in one of the craziest countries in the world. There was absolutely no freedom of anything and the government would tell you what to think and what to do,” she explains. The creation of the title track from her second album, “Something Of My Own,” was influenced by the path of self-discovery that one embarks upon. “Something Of My Own’ is about basically trying to figure out things for yourself . . . being yourself and understanding who you are on your own without letting anyone tell you what you should be.” The dedication to embracing having a strong self of herself is readily apparent in Marina’s music. “Blinded by day and lost in lies / Feeling how I was always told / I’m living someone else’s life / Searching for truth to call my own / Searching for something of my own.”

The years Marina spent in Russia played an integral part in her musical development. “Because the Soviet Union was so closed, they did not allow any foreign music for a long time. For example, the Beatles were banned. The majority of western music— and by “western” I mean anything that is outside of the Soviet Union— was banned. I grew up listening to a lot of classical music and some horrible Russian pop music and some Russian folk music, but mainly classical,” says Marina who sings, writes and plays piano. “I think that influenced me tremendously. When I was in my early teens, I finally found some Beatles music and I became a fan that first day.” The seemingly disparate musical influences help to create a sound that is at once emotional, dynamic and moving.

Describing her live shows as “intimate and down to earth,” Marina especially enjoys bringing her music to life before an audience. “I always feel passionate about my music, but when people are attentively listening, I can tell, especially in a small audience. It’s absolutely amazing to see somebody totally feeling the songs and that makes me so much more excited and makes me even more passionate,” Marina enthuses, before continuing. “To me, that’s the best feeling ever. My favorite thing is performing live.” Breathing emotion into a song creates an almost sacred connection between an artist and the audience and even more so, to the song itself. In the spaces between silence and sound, music and words, lives something timeless and unlimited. While she has several favorite songs to perform live, the peaceful, rolling ballad “Ocean” is one of her favorites. “Ocean in a distant harbor / It seems you’re getting farther / I’ll walk still tomorrow / To my ocean in a distant harbor. ”

Marina’s commitment to pursuing her passion and to cultivating her talents that have led her to create new worlds musically, is the same that led her half way across the world— literally. “When I first came to America, I was fifteen and I came as an exchange student and they placed me in Springfield, IL, a small town. I went to high school there for a year and then, when I went back to Russia, I decided that I wanted to come back to America, no matter what. Nine months later, I moved back to America and Illinois was the only place I knew, so I stayed there and went to college there for four years,” says Marina. While she studied business, international politics and Spanish, Marina always played music and knew in her heart that that was to be her true path. “I knew that even before I started attending college, but that was the only way for me to stay in the country. . . I got a scholarship to college and that was pretty much the only way to live in the country. . . to have a student visa. I decided I’ll just go to school and do whatever it takes.”

With wisdom and depth beyond her years, Marina recognizes the impact that music and the art of creating has had on her life. “It’s almost a healing process. It’s better than any diary. You write down and share it with people.” Sharing the writing process with Nick Baker, who also plays in her live band, Marina explains, “We write almost everything together. He’s a great lyricist. I usually write the music and then, we sit down and co-write the lyrics.” Their creative relationship is one that is especially complementary. “I’m a melody person. Music to me, for some reason, comes much easier than lyrics and it’s always first. I usually hear melody and chords in my head and words come a bit later. . . I’m working on a few songs at a time, at all times.” The song “Simple Magic,” about the almost mystical quality of mutual attraction, begins softly with breathy vocals and crescendos into the soaring chorus. “I’m feeling your simple magic / I’m fighting the curse of your love and I can’t take it.”

Now living in Los Angeles and looking toward the future, Marina feels at home. “When I moved to LA, it totally felt right because most people who come here are ambitious. And, I really feel comfortable here because it’s kind of understood that you’re here to pursue your dreams.” Though she jokes about missing the change of seasons living in southern California, Marina has the perfect solution in mind. “Eventually, I will be travelling all the time— in the Winter and Fall to other parts of the country and the world to enjoy the changes of the seasons. . . My dream is to tour the world and have a little bit of free time in between shows to see around.”

In the Summer of 2003, Marina teamed up with the legendary New York-based manager David Krebs, who has managed bands such as Aerosmith and AC/DC. Thrilled about their partnership, Marina says, “I feel like it’s one of my big breaks, getting a well-known manager on my side. I’m extremely honored.” Passionate about what the future holds, Marina is also appreciative of where she is now— and of the roads she’s taken on her journey. “For me personally, success is being happy with what I do. Like right now, I feel very happy with what I’m doing and feel I am successful.” Indeed, Marina V has found a simple magic that’s all her own.