An Interview with Sally French by Anna Maria Stjärnell 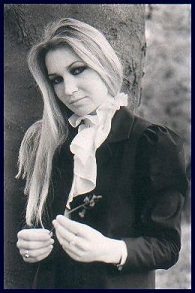 What have you done prior to releasing this album?
Before releasing DESTINY my current CD album on my own record label Dragonfly Lake, I have lived an entire life! I graduated aged 21 with a BA degree in the Creative Arts. One of my tutors was Professor Stephanie Jordan who was featured in this summer’s BBC Proms festival. I was also given training to be a classical operatic soprano. Later I was given a one CD recording contract by SI Music of Holland. That particular record company closed down so I created Dragonfly Lake to take full control of getting my songs and recordings out into the world. I also worked as a professional dancer for touring rock bands in the UK I am also an artist -I paint in oils. For more details look at www.dragonflylake.co.uk

What artists have inspired you?
No particular artist has inspired my method of writing songs, but I love listening to Mozart, Beethoven, Jim Steinman, Led Zeppelin and Pink Floyd. I think that Pink Floyd are the only writers to influence me directly, although I am developing an interest in ancient Chinese and Japanese traditional music.

Your songs are mostly based on myth and legend. What draws you to these sources for inspiration?
Although it sounds like I am inspired by myth and legend, most of my compositions and lyrics are an expression of my own experiences in life, some too personal to explain at the moment. Most of what I have experienced in life so far can be likened to a well known myth or legend. On DESTINY the only exception is Call Another Doctor. I enjoyed making up a character who is divorced with children and feels hard-done-by.

What will the next record sound like?
My next CD album will be a new collection of my original songs which just happen to be more challenging for my soprano voice! Today I am much more advanced as a singer. The songs are, even more, a celebration of the power of Nature or a recognition of Nature’s ability to destroy. And there I am surrounded by woodlands and nature on my website. See www.sally-french.com It will be bigger sounding than DESTINY although I am very proud that DESTINY is so intimate as well as moving.

What has the response been to this one so far?
Because I am female people have a preconceived idea of what my music is going to sound like and then when they actually hear it they are very surprised. It is not how they expected it to be. It is not at all cute and sweet. it is enormous and powerful. One young male fan said. DESTINY is a positive fresh new sound and a breath of fresh air amongst the choking and infectious manner of modern day popular music.