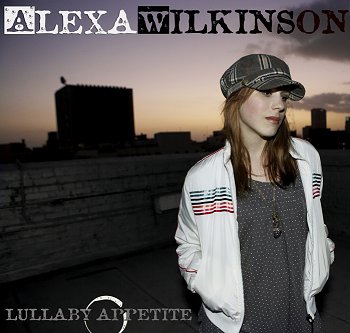 NEW YORK, NY Wilspro Management is proud to announce the debut CD Lullaby Appetite by 20-year-old singer-songwriter ALEXA WILKINSON. Alexa just completed her first tour in which she opened for Josh Kelley from April 10 through May 4, 2007. Spanning 10 cities in 6 different states, this tour premiered her collection of 11 original songs, all written or co-written by Wilkinson herself. â€œLullaby Appetiteâ€? is now available and will be nationally released July 10, 2007 on DNK Records (home to Josh Kelley.)

Having taken up music at the age of 10, Wilkinson is a formidable talent in a small (and young) package. Her fresh, smooth vocals slide easily around the extremely hummable melodies, toe-tapping rhythms and sprite guitar playing. The lyrics are rich with expression, exposing a vulnerability and honesty but without naivete. Rather there is an emotional maturity of looking at life with an optimistic eye, learning from one’s mistakes, and moving on.

Josh Kelley, an accomplished singer-songwriter promoting his third album on this tour, took notice of Alexaâ€™s talent and by July of 2006, had collaborated on and produced five of her songs. Other collaborators with Alexa include Michael Brauer (Coldplay, Paul McCartney, and Grammy winner John Mayer), David Thoener (Matchbox 20, Faith Hill, and Santana), and Greg Calbi (John Lennon, Paul Simon, Bruce Springsteen, and Lenny Kravitz).

“I was immediately impressed with Alexa’s music she is an extremely talented singer and songwriter whose unique sound will no doubt propel her to the top. She’s got such a natural, easygoing style to her music that anyone from all ages can relate to. I’m proud to have her on tour with me!”