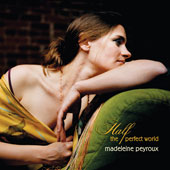 Cambridge, MA â€“ Madeleine Peyroux, the smoky voiced singer whose remarkable recent success made her one of the major surprise hit stories of last year, has completed work on her new album titled â€˜Half the Perfect Worldâ€™, set for release September 12 on Rounder Records. Peyroux spent the month of April in Los Angeles recording with producer Larry Klein, who also worked with the singer on her worldwide million selling smash Careless Love. Klein recently told the Wall St. Journal that Peyroux is working with an â€œexpanded palette,â€? while the newspaper predicted the new album â€œmay expand…her audience.â€?

Besides landing on top ten album of the year lists in Newsweek and the Wall St. Journal among many other critical coups, Careless Love is nearing Gold in the US with another 600,000 for the rest of the world. Itâ€™s Gold in the UK, France and Australia. Plans are in the works for major touring in the Fall.

Founded in 1970, Rounder Records is America’s premier independent label. Rounder and its ZoÃ«, Heartbeat, Philo and Bullseye Blues imprints have a catalog of over 3000 albums, representing a wide variety of folk, roots, rock, blues, and reggae music.

Check out the first single â€œIâ€™m All Rightâ€? [HERE]

[This page] has sound samples.