This came across my desk today and since I loved the Gear Daddies…. 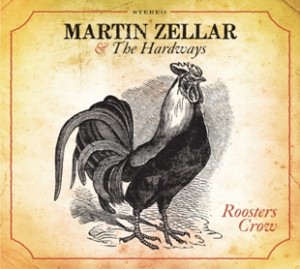 Singer/songwriter Martin Zellar‘s country-tinged portraits of life, love, and regret have resonated with listeners for over 25 years. Zellar, who first appeared on the Minneapolis music scene as the lead singer and songwriter of the alt-country pioneering Gear Daddies, is now back with his first studio album of new material in ten years. The album, Roosters Crow, is set for release on February 7, 2012 via Owen Lee Recordings, and Zellar, who now lives in Central Mexico with his family, will return to the U.S. for a nationwide tour in support of the new release.

Roosters Crow is a long-overdue album that will coincide with the 25th anniversary of the debut release of the Gear Daddies, who released two albums on Polygram Records before amicably parting ways in 1992.

Roosters Crow, which is the follow-up to 2002’s Scattered, is perhaps Zellar’s most introspective effort to date, delving deep into his personal experiences -– good and bad -– over the last decade.

“Letting go of my more personal songs has always been hard for me,” said Zellar. “Sending some of these songs out into the world was especially difficult.”

But If you look through a sampling of Zellar’s press materials over the past 25 years, it won’t take long to notice how often phrases like “under- appreciated” and “underrated” show up. It’s not something Zellar has given a lot of thought to; instead, he has continued to move forward and reliably deliver what his fans have come to expect from him over the years: quality songwriting and heartfelt performances.

“I always hope for the best when I release a new CD,” says Zellar, “but mostly I hope it gets heard.”

“…writers, from Dylan to Springsteen, often tell us far more about the human condition by concentrating on life’s everyday moments. That’s the strength of Martin Zellar…”–Robert Hillburn, Los Angeles Times

“Talk about the most underrated songwriters of the past decade and this guy’s got to be in your first sentence.”–Kevin O’Hare, Newhouse News Service

← Album Review:A Very She & Him Christmas by She & Him
Roxanne de Bastion video →