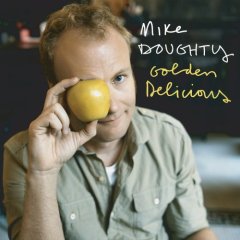 Golden Delicious is released by ATO Records today, February 19. The first single, 27 Jennifers, is currently in the top 10 at AAA radio, according to MediaBase. In early reviews, Relix called it a “ripe and fruitful album,” and Paste said, “those with a taste for his off-kilter sensibility will find his latest delicious indeed.”

← Pandora knows what I need…apparently.
Album Review: This Riot Life by Veda Hille →