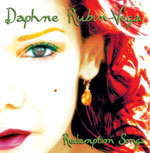 This is a bit of an eclectic record. It’s difficult to categorize. There are many flavors here. She begins with a mainly pop-rock song, moves into some Latin grooves, some adult contemporary and ends with a Muppet song. Yes, you read right, the record ends with The Rainbow Connection made famous by none other than Kermit the Frog. Her version is actually really cool.

Because the record seems a little “all over the place” it would be hard to say it’s something I would pick out to listen to, or be in the mood for because there are so many moods represented. However, I like that she shows many different sides of her talent. I might pick out some of these songs for mix CDs or something.

She has a nice voice, and I really can’t find anything wrong with the record. I’m just having trouble falling in love with it. But as they say, your mileage may vary.