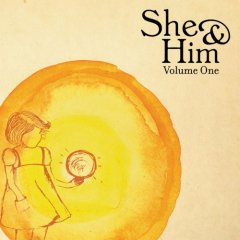 I purposely tried not to read too much about this record before I got it. I wanted to hear it fresh. I fell for Zooey Deschanel’s voice when she sang Baby it’s Cold Outside to Will Ferrell in the film Elf. At that time I said that I wished she had a record out. So I had to wait 5 years, but hey…

My copy arrived just yesterday and I popped it into my player this morning on my way to work. My first thought was that it was a little odd. I was having a hard time wrapping my head around her voice. It is clearly and distinctively Zooey, it just sounded…different.

What I liked about her vocal style in that film was that she made it seem effortless. Almost like she was speaking the words, like they just fell right out of her. Her style hasn’t really changed, at least in her phrasing. She sings conversationally. Most singers are trained to emphasize the vowel, not the consonant. An example, is when she sings the word, “world” she emphasizes the ‘rrrrrr’ sound as opposed to the ‘ohhhhh’ sound. So my guess is she has not had formal training. It’s fine, it’s just distracting for me, personally, since I remember learning this myself. But it does help to make her unique. Not that she wouldn’t be otherwise, she definitely is unique.

The music is really a mish-mash. It ranges from 60s sunshine pop (think Partridge Family) to Motown to Torch. And then the CD ends with the old traditional, Swing Low, Sweet Chariot. The album itself is pretty schizophrenic, but it’s good for showing her range of styles.

When I Thought I Saw Your Face Today came on I thought, “ah, that’s the Zooey I wanted to hear!” her voice just sounds so good on those deep notes and torchy nightclub melodies.

But then I Was Made for You is a sort of do-whop/Motown-ish, which I don’t like at all. Anything that sounds like it could be on the Dirty Dancing soundtrack is not for me (enjoyed the movie back in the day, but a ‘yuck’ to the music).

I am embarrassed to say that I know little about M.Ward’s music. I had a friend who adored him and she and I shared many musical tastes so I am sure I would like him if I gave his stuff a listen. I just haven’t. I barely have enough time to listen to the stuff that is submitted to me, let alone stuff I pick out for myself. There just aren’t enough hours in the day. I was under the impression that he wrote all these songs and she sang them. But the liner notes say that all the songs (except for the Smokey Robinson, Beatles and traditional ones, and one she co-wrote with Jason Schwartzman). So I am doubly impressed. Yet, admittedly a little confused as to where “Him” comes into it. I understand that M. Ward plays several instruments and produced it, but that seems more like a background role (not that it’s not an extremely important one) rather than a ‘band-mate’- equal billing role. But it was probably a marketing choice.

As I said, I have really only given this short ear time, but these are my first thoughts. If anything changes I will update this review.

1 comment for “Album Review: Volume One by She & Him”