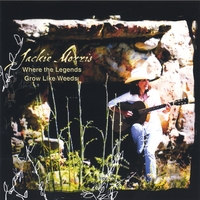 I liked the first few songs on this record. They had a sort of 70s folky feel with a “The Wreck of the Edmund Fitzgerald” sort of vibe. There was also a bit of a Spanish flavor to the rhythms of the first two songs. The second one in particular.

But then by track 3 it turned into a real rootsy country record and I don’t care for that as much. At least it’s not that annoying newish super twangy country, it’s actually more old fashioned which I can get behind most of the time.

But Jackie Morris’ voice is nice though sounds a little affected at times. It seems like it would be more suited to jazzy chanteuse-y music. It’s too pretty and clear to be singing gritty country music. But of course, that just my opinion.