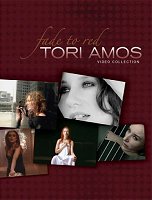 I’ve been a Tori fan for a long time (I was the first person I knew who had heard of her, back in the “Earthquake” days). But I outgrew MTV (except 120 minutes) around 1989 so I didn’t see a lot of these videos before today. It was nice to see the intended visuals to see how alike (or unlike) they are from my own.

I watched the entire first disc before I realized there was audio commentary so I had to watch it all over again with it. I recommend doing this. Tori’s comments are fascinating.

About ¾ through the first song (Past the Mission) I realized I had goose bumps. It helps that I’m watching this on a 10-foot screen and with surround sound.

The videos are not in chronological order, we do first see two early ones, but the 7th song is from her latest release, “The Beekeeper”

“Crucify” reminds us of her love (lust?) affair with the piano bench. This one has some fascinating commentary. Anne Boleyn, Christianity, cheerleaders, oh my. I’ll have to watch this again to really understand it.

The art direction on most of these videos is spectacular. They seem to capture the feeling of Tori’s music. Even though she’s made it to the mainstream her ideas/images have always been far from ordinary.

I think many of us will agree that “Sorta Fairytale” is probably the most disturbing. In case you’ve forgotten, that’s the one where Tori is a head with only a leg in a high heeled pump for a body and Adrian Brody is a head with an arm for a body (he gets a watch). I can’t help but smile when the Tori head/leg hitches a ride on a passing skateboard. Well…that’s Tori for you. One of the bonus features was a behind the scenes of the making of this video. Very interesting.

“Spark” creeps me out, I love it. She gives us some insight to this song/video and the name on the tree, which I won’t spoil for you. I’ll just say this is my favorite piece on here.

I’ve always had a tough time with understanding “Cornflake Girl”. So I was so looking forward to learning more. But I am no closer to an understanding. I get that it’s about how women treat each other, but what the heck does, “Peel out the watchword” mean?

“Hey Jupiter” sees her in make up like I’ve never seen. The make up artists is Kevyn Aucoin. I don’t imagine that this was intentional, but I think he’s made her up to look like Sarah McLachlan. I have no idea why that would be an intention so it’s probably not, it’s just what I see.

In “Caught a Light Sneeze” I learned that the Dark Prince (not Satan) is a woman and she drives an ice cream truck. The visuals here are amazing.

“God” is about how different people and cultures worship differently and their respective rituals. You get to see Tori roll around on the floor with rats and dance with snakes.

“Talulah” is about investigation. But Tori herself said she actually had no idea what the video was about. She just let the director do whatever he wanted. She reminds us of her theme of being in a box. This shows up in a lot of her videos.

“Sweet the Sting” she takes a stab at artists who use dat tracks when performing live. She says they’re not really musicians. Ouch!! (but I agree).

“Professional Widow (remix)” is a culmination of all these videos edited into one. The song is unrecognizable. But still sounds pretty cool.

Packaging is beautiful from photographs to fonts and colors. It nicely depicts what’s inside.