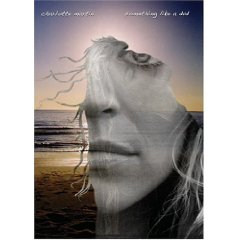 (note, this was a re-post of a review I did awhile ago, but it somehow got lost and fell off the site so I put it back on)

This is a performance video. That is, not crazy storylines or strange imagery (sorry I just watched the Tori Amos DVD collection). This is just Charlotte, her piano and a handful of fans.

The DVD is set up as such: Live performances interspersed with some snippets of rehearsals, recordings and other random footage, including fan interviews.

Most of the time this works just fine, but the first non-performance snippet was just confusing. They showed some rehearsal, some recording but never enough to really see what’s going on. This is interesting stuff but would have been greatly improved to have Charlotte doing some audio commentary on these so that we had a better idea of what exactly we were seeing and why it was important.

Her performances are fantastic. Since the stars are against my ever seeing Charlotte Martin live it was great to see this and to actually get to see how much she puts into her performances. There’s a ton of emotion in her voice and physicality. Stunning to watch.

The camera work could have used some help, or maybe a tripod. The herky-jerky movements made me dizzy. Happily, this was tamed more after the first couple of songs. There were some lovely close-ups.

There was some cute footage of Charlotte playing with a Donald Trump Doll and trying not to pee in a slow moving car. These little parts show how very silly and charming she is. If you don’t already want to be her best friend, you will after seeing this.

In her live version of “Madman” my prevailing thought was that she was channeling you-know-who.

These live scenes prove she is not just a good studio musician. She rocks live.

We get to see “Lost in Space” a song considered for “On Your Shore” but not used. The sound quality isn’t great, but the casual style of it makes you feel like you’re in the room. It’s a pretty song. She really is an amazing pianist. I’d like to see that song end up on another release.

One other great moment is when she played “Darkest Hour” and then it went right into Kate Bush’s “Running up that Hill” but only for a second before it melted into…”Limits of our Love”. I thought, ‘Ah so it’s not just me who thinks that could be a Kate Bush song!’ I’ve always called this her Kate Song. I love it (more than I love Kate, I must admit).

Her performance of “Four Walls” was very cool. She used a drum machine/loop station sort of thing. It looks like she’s having a ball. Which, of course, makes us enjoy it all the more. It really makes me wish I’d been there.

“Step Back” is a studio outtake. A still-photo montage. Great photos and a very solid song. This is the closest thing to an actual video on here. Very nicely done.

I thought this was a great way to end the DVD but it was not over. We still had not heard “Something Like a Hero” which we all know has to be on here, given the name of the DVD. So the DVD closes with her performance of that song.

“Something Like A DVD” is like sort of an open love letter to her fans. Being a fan myself, I appreciate it. If you’re even a casual fan of hers I think you need to have this. If for no other reason, when she becomes super famous, you can show it to all your friends and say you knew her when.

The packaging is very slick. The photography is great. Especially the photo of Charlotte on a bench on the inside cover. Beautiful. Just like she is.