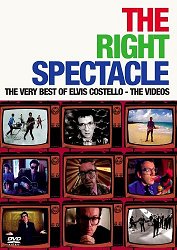 Being a fan of VH1’s “Behind the Music” I love that you can choose to watch these with commentary by Mr. Costello himself. You can choose audio where it sounds like he’s sitting right next to you, watching along with you. Or you can choose subtitles if you want to play “Pop Up Video”. However I would suggest using both because the captions do not match exactly, and 9 times out of 10, what he is speaking is much more funny, and clever than what appears on screen. Plus, the inflections just aren’t there in print only.

I didn’t realized just how funny this man is, but there were many times when I was laughing out loud (and I don’t laugh easily). It was just so fun to watch the videos and listen to him telling you how drunk he was in this one particular one, or giving a little background story on the song or the video. It’s very charming.

What was nice for me is to hear/see some of these songs I had not heard before. I didn’t know he did a cover of “Sweet Dreams”. It’s the one Patsy Cline made famous (as opposed to the Eurythmics one) and it’s a very nice version. Now I want to go out and get all these records. Which I guess is kind of the idea, huh?

Just an aside: I have to say that Elvis Costello is one of those people that gets better looking with age. He was a funky lookin’ kid, what with those ginormous glasses and spacey teeth. But I think he’s quite handsome now.

Even if you’re a casual fan like me, I think you will enjoy this. I’ve always liked his music, I own a coupe of records (albums, yes!) but was not a fanatic. But this was very entertaining. This DVD is a must for any Elvis Costello fan.

Special features: there is a section of television appearances included. He says he particularly likes the ones where his lip-synching is off.

← Beth Waters on TV
Album Review: Kick in Your Heart by Gliss →