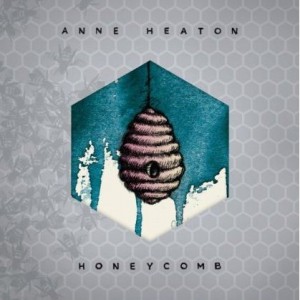 As some of you might remember, Anne Heaton played a house concert at Collected Sounds awhile ago. ([OMG it was in 2004, how time flies…]
Well, I’m excited to let you know that she’s got a new album coming out next month. It’s called Honeycomb and you can preorder it here:

“…her most eccentric work yet.”
– Boston Phoenix

Chicago-based singer-songwriter Anne Heaton is set to release her fourth album, Honeycomb, on October 16, 2012, via her own Spill Records label. Produced by Heaton, Gary Maurer (Hem) and Mike Denneen (Howie Day, Aimee Mann), the album features 12 songs and is organized into two moods – euphoric and meditative – with a uniting theme of impermanence linking them together. Two of the songs are musical adaptations of poems by 13th-century mystic Rumi; one is an adaptation of the Catholic “Saint Francis Prayer;” a field-recording of a conversation with her father makes an appearance, as does a cover of Coldplay’s “Viva La Vida.” Fans voted to select Honeycomb as the album title.

“The first part you can really sing out loud to while you dance around the house,” Heaton explains. “The second part is music you can let wash over you while you lay down. But the ideas and feelings expressed are very connected—the theme of being present reigns throughout. The album is a pilgrimage toward, and a celebration of, letting go.”

Honeycomb is innovatively packaged with artwork by graphic artist Brian Grunert that vibrantly evokes the spirit in each of the 12 songs; each song gets its own glossy artwork card which can be slotted into the cover position based on the listener’s preference. “These songs are like colorful landscapes, full of detail, and the images are a singular point of focus—one cell of the song to stand for the whole,” says Heaton. “It’s kind of like in the book ‘Good Night Moon.’ You go from the colorful scene of the whole bedroom and all the items in there, to the next page, where it’s just an image of a brush on a table.”

Heaton has toured nationally, played the Sundance Film Festival, Lilith Fair, and has been a featured artist on the New York Times Music Podcast. Heaton has also played numerous times on NPR. In 2005, she won Soul City Cafe, a national competition of live performances and online voting to choose Jewel’s opener for her West Coast Tour. In addition to Jewel’s tour, Heaton has also shared the stage with Sarah McLachlan, Winterbloom, Melissa Ferrick, Hem, Chris Trapper, Jill Sobule, The Pernice Brothers, Jennifer Kimball, and Jonatha Brooke. In a live review, the Seattle Times gushed Heaton was “a natural performer [with] a rich, soaring voice.” Tour dates are planned in support of Honeycomb (the tour kicked off with an album preview show at Club Passim in Boston last week), and Heaton will be touring in December for a series of holiday shows with the Winterbloom collective (which also features Antje Duvekot, Meg Hutchinson, and Natalia Zuckerman). (See tour schedule below; more dates will be confirmed.)

***A portion of all proceeds from Anne’s tour this Fall will be donated to Fundación Niños de los Andes, a non-profit organization dedicated to the rescue, protection and rehabilitation of street children in Bogota, Colombia (and other towns throughout the country). Anne met many of these street children in 2008 when she visited the Fundación and had an opportunity to hear their stories and learn about their lives. To create awareness, Anne turned some of these stories into songs. (This project is coming in 2014.) This organization remains close to Anne’s heart, and she wants the children to know she cares about them by donating to the organization. Fundación Niños de los Andes helps children, who have lived in violent and insecure conditions, to recuperate psychologically, physically and spiritually, and to reintegrate into society. Learn more at http://ninandes.org/***