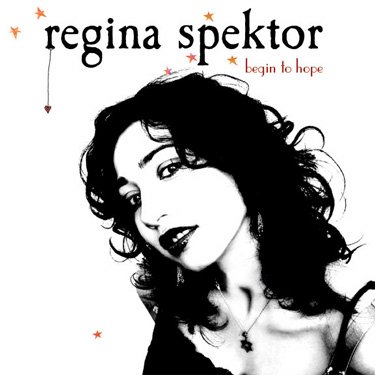 Wow, she’s everywhere lately!! Seems it was just a couple of years ago she and I were talking about her doing a house concert! Oh wait, it was!! It never happened and looks like now it never will since she’s a famous rock star now. But I’m so happy for her. That’s the new album cover!
Here’s the latest:

Check out the brand-new video for “Better” from Regina’s new album Begin To Hope. It’s premiering right now at Artist Direct. Just click here to check it out! (the album is due out June 13, 2006)

Regina is on the road in the US right now and she’ll be touring in Europe this summer. Head over to reginaspektor.com and check out the tour dates for the US. And stay tuned for the summer dates to be announced.

Make sure to tune into Grey’s Anatomy on ABC on May 7th as “On The Radio” will be featured on the show. Then catch her performing live on Late Night with Conan O’Brien on June 13th! Don’t forget that three tracks from Regina’s upcoming album Begin To Hope are now available at your favorite digital store. Click here for “Better,” here for “Fidelity” and here for “Summer In The City.”