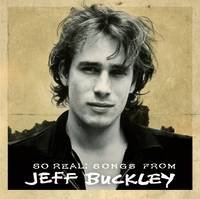 Jeff Buckley is one of my favorite artists of all time. His passing was to say the least, devastating. But luckily his people are still sharing his music with us. Has it really been 10 years?

Buckleyâ€™s â€œlamentably brief career,â€? as it has been characterized by his mother, Mary Guibert, came to a tragic and untimely end on May 29, 1997 (at age 30) when he died in a swimming mishap outside Memphis by the banks of the Mississippi River, during a recording stint in Memphis.

One week prior to the 10th anniversary of that date, SO REAL: SONGS FROM JEFF BUCKLEY the first official anthology of his work (including two previously unreleased performances) â€“ â€œthe closest Jeff Buckley â€“ singer, songwriter, guitarist, seeker â€“ ever comes to having his own greatest-hits record,â€? as Rolling Stone senior editor David Frickeâ€™s liner notes begin â€“ will arrive in stores on Columbia/Legacy, a division of SONY BMG MUSIC ENTERTAINMENT.

Of primal interest to fans, collectors and completists will be the two tracks making their album debuts on SO REAL: SONGS FROM JEFF BUCKLEY. â€œSo Real,â€? originally the centerpiece of Grace, is heard in an acoustic version recorded in Japan. It was previously available only on a promotional single.

The other rarity closes the album, a live version of Buckley and his band â€œspacewalking with elegance through the harrowing resignation of â€˜I Know Itâ€™s Overâ€™,â€? as Fricke introduces this cover of the song from the Smithsâ€™ 1986 album, The Queen is Dead. The scene was a live session at Sony Studios in New York intended for broadcast on WNEW-FM on April 6, 1995. But the session was edited and the song was not included on the radio broadcast. The remaining 12 other tracks on the generous 73-minute collection are drawn from Jeff Buckleyâ€™s four principal Columbia and Columbia/Legacy catalog releases.

2. Lover You Should Have Come Over (B)

7. Everybody Here Wants You (D)

8. So Real (previously unreleased commercially â€“ non-album acoustic version live in Japan, and previously available only as a promotional single)

14. I Know It’s Over (live) (previously unreleased â€“ Smiths cover (from The Queen is Dead) at a live session at Sony Studios, edited for broadcast on WNEW-FM on April 6, 1995, but not included on the radio broadcast).