This is going to be a little more personal than most of my posts. I used to write a personal blog and I don’t anymore, so sometimes I’m just going to have to blurt out stuff here. Sorry. I warned you.

So this will be my trip journal of sorts. I’ve been back for a week now, let’s see how much I remember!

Saturday, February 5th, 2011:
We arrived in Miami in the late afternoon and by the time we waited forever for our luggage, then another forever for the airport shuttle, we got to the Airport Hilton. It was a nice hotel with a pretty decent (albeit expensive) restaurant ($18 for salad bar? Really?). But WiFi was not free. I remembered that last time we went to Miami we also had to pay for WiFi, that stinks.

We got up bright and early and had breakfast and headed to the port. I’m actually feeling all excited right now just the way I felt when we were going there. It’s that adrenaline stir of anticipation…eeee!!!! (calm down, Amy, you’re not actually getting ready to get on the boat now…deep breaths…)

OK so we got in line: 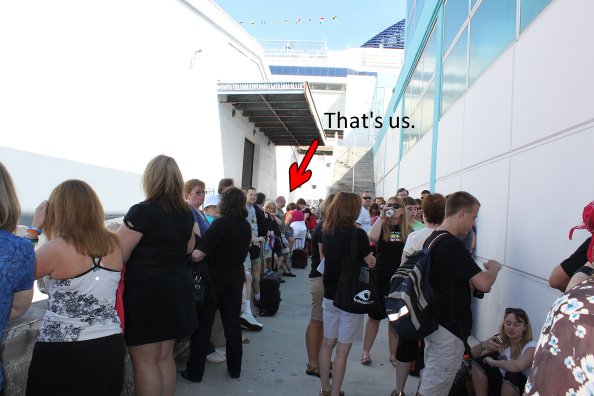 After going through security and there being some sort of problem with the computers that resulted in a lot of shifting weight on our feet and sweating, we finally got into the terminal where we wait to be called to get on the ship.

This was kind of a cluster F— and while wandering around trying to figure out where we were supposed to be we got yelled at by a woman who was deathly afraid we’d get in front of her in line. As if we’d get there before her and get her….wait…what exactly would we gain? I don’t know anyway, she was referred to as Mz Crabbypants for the rest of the cruise.

So we grabbed lunch at the Bimini Grill (hamburgers and fries…what? I’m on vacation). Then got our spot for the Sail Away show entertainment provided by the Barenaked Ladies! 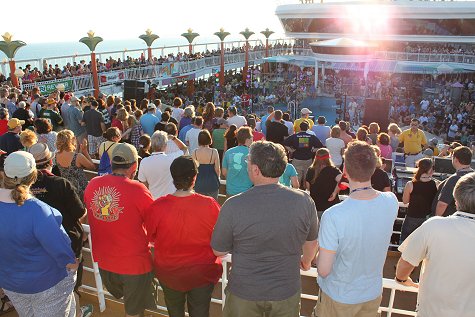 Here’s a video of the Sail Away show. We couldn’t see from where we were but it sounded awesome and was a blast.

← Something Else is Waiting by Lithium Seven
Album Review: The Past Ain’t Far by John Scheaffer and Ceramic →