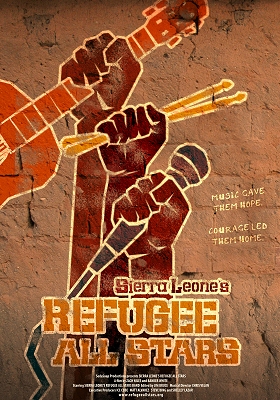 In The Face Of War, Music Is Sometimes The Best Defenseâ€¦

On August 14, DocuramaÂ® released the uplifting story of refugees who used the power of music to deliver a message of peace.

From Executive Producer Ice Cube, this Inspirational, Acclaimed Award-Winner, Praised by Icons such as Paul McCartney and Keith Richards, is Timed to Coincide With the Release of the Bandâ€™s New Album and International Tour

NEW YORK, NY — After being forced from their homes by a brutal, decade-long civil war, six Sierra Leonean musicians found an unlikely form of healing to deal with losing everything — they formed a band. The bandâ€™s sound — a mixture of home-grown West African beats, roots-reggae and Western-influenced R&B combined with heartfelt lyrics which condemn war and encourage social change — gave hope to their countrymen and has been praised around the world, leading to the bandâ€™s first U.S. tour this summer. Sierra Leoneâ€™s Refugee All Stars chronicles the courageous band over three years, from Guinean refugee camps back to their war-ravaged homeland, as they spread a message of peace and tolerance. Serving as a unique tribute to the power of music and the celebration of the human spirit, this award-winning film from directors Zach Niles and Banker White, is be available on DVD now.