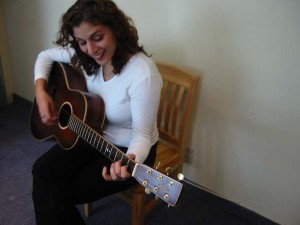 After a 4 year hiatus from the music industry, Andrea Florian has put together a sample of 3 new songs. Revisiting her first love, the piano, Andrea’s new works and lyrics reflect some of the introspection of her first recordings, whilst bringing a fresh new perspective to her writing. Produced by longterm friend and musician Lisa Patterson, expect lush production of cello and string sections alongside smooth and simple horn arrangements.

Andrea began playing piano at age five. She recorded her first full length CD at age 21. Self funded and promoted, it generated over 1000 sales within just a few months. In the following 2 1/2 years, Andrea recorded 2 more CD’s, “only human” and “somehurrygood”. A break from recording kept her busy on the road with touring and promoting, landing her several coveted promotional opportunities such as a full length article in NY’s Billboard Magazine, a number of festival showcases, a Factor funded video for her single, “She Said”, several recording and touring grants as well as numerous television appearances in Canada and the US. After coming home from a self booked and promoted tour through Australia, in 2002; an effort that took her through the entire southeast coast and consisted of 25 shows within two weeks, features in major press, TV and street festivals, Andrea joined John Switzer (Jane Siberry, the Waltons) in the studio to complete, “Picture This’, a full length album of her first co-written songs. The album was well received and Andrea set out on tour once again to promote the new songs.

Four years later, Andrea has been devoting her time to writing and spending time with her new family. These three new songs are just a sampling of the many songs still lying in wait to get their turn in the studio. In the next few years, Andrea intends to release several more EP’s of this type, hoping that it will allow her to give more focus to each song, and release more songs more often. We appreciate everyone’s patience these last few years and promise that there is still much more to come!

Buy Picture This at CDBaby

Buy Only Human at CDBaby