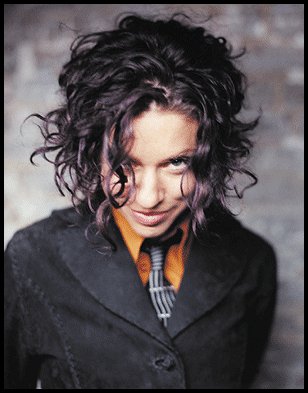 Her parents are Elizabeth and Dante and one brother (no relation to DeFranco as some believe).

She began playing Beatle’s songs in coffee houses she was only nine years old.

Always the prolific writer, she had written over 100 songs by the time she was 19….and didn’t even start writing until she was 15. It was at that time she released her first CD, the self-titled “Ani DiFranco”. It was also then that she formed her little indie record company, Righteous Babe which is now a multi-million dollar corporation.

She is a punk-folk singer with a distinctive guitar style and personality to boot. Ani has a totally distinctive sound, due to her irreverent lyrics that can be anything from spoken word to serious rock and her guitar strumming style that is unparalleled

Ani married her soundman, Andrew Gilchrist (aka Goatboy) in spring of 1998. It is believed that her CD, “Dilate” was written for him. They are no longer together.

On January 26th, 2007 she gave birth to a 7 pound, 8 oz. girl, Petah Lucia, at her Buffalo home. This is the first child for the prolific rocker with engineer Mike Napolitano, a man whom she credits in part to her newfound happiness.

Read reviews of:
[Knuckle Down]
[Educated Guess]
[Revelling/Reckoning]
[To the Teeth]

…too many bootlegs, EPs and singles to even being to list!!