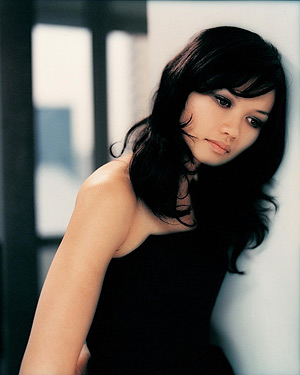 Bic (pronounced Beck) Runga is a rare kind of artist. In an age of increasing musical specialisation, it is rare to find a woman who not only writes, sings and plays but also produces her debut album. Rarer still when that artist is only twenty-one years old.

Hailing from Christchurch, New Zealand, Bic grew up in a family where music and art were positively encouraged. (“Stupid hippie things that don’t make money”, she says with a laugh.) Her mother had been a lounge singer in Malaysian night-clubs in the ’60s; her father and two older sisters also played and sang.

Drums were eleven year old Bic’s first passion; by her mid-teens she was singing with jazz groups. At school she toyed with ambitions of becoming a poet but, after taking up guitar and keyboards, channelled her muse into writing her own songs. Bic moved to Auckland in 1994 to pursue a recording career, and spent a year writing, performing and building a reputation with her powerful solo live shows.

From the bio on Bic From the Sony New Zealand Website (I attempted to cut some of this because of the length, but all of it was interesting!)

In September 1995, aged nineteen, Bic signed as a recording artist with Sony Music New Zealand and in December that year Sony released her first single, the hauntingly beautiful “Drive”. The song charted top ten in the national chart sales and won her the prestigious 1996 Silver Scroll, an award for excellence in song writing previously held by such celebrated New Zealand songwriters as Shona Laing, Dave Dobbyn and Strawpeople.Throughout 1996, Bic performed nationally, heading her own shows as well as sharing stages with such legendary New Zealand names as Crowded House’s Neil Finn and his brother Tim.

Bic’s second single, “Bursting Through” was released in September 1996 and went top twenty, A third top ten single, “Sway” followed in May 1997. By this time Bic was already focused on her next milestone; the making of her debut album, “Drive.” Bic was determined that to realise the sounds she heard in her head, she must have control of the album’s production.”If the job had been given to someone else I would have spent the whole time stressing about it”, she says.

In the pre-production stages, Bic had the invaluable assistance of legendary producer and A&R man Peter Asher (James Taylor, Linda Ronstadt, Bonnie Raitt), who expressed an eagerness to be involved after hearing her demos. He helped Bic choose which of her songs to record (from a shortlist of 21), and gave expert advice on the arrangements. Entering Auckland’s Revolver Studios in May 1997, Bic completed recording in a feverish three weeks. She worked with a core band of guitarist Andrew Thorne, bass player Aaron McDonald and drummer Wayne Bell, as well as playing many instruments herself: guitars, mellotron, xylophone, drums. “I’m not a great drummer”, she says, “but my playing has a sort of pubescent energy that I like. My drumming is dumb, in a positive way. Sometimes session players can be too clever”.

As producer, Bic adopted a less-is-more policy. “I wanted the album to sound sparse and spacious. I don’t like music that is too busy”. It was also important to her that the album recreated “the energy and adrenaline of a live gig”. To build an atmosphere for the recording, Bic shifted into the studio an array of furniture and lamps from home. “I took advice from Dave Dobbyn. He said bring in rugs, anything to make you feel comfortable. Picking the right time of day to record is important, too. Like early evenings”.

With tracking finished, it was off to LA. for the final mixdown, where in-demand mixing engineer Matt Wallace (Faith No More, John Hiatt) brought the album to completion. Those who meet Bic may be surprised at the contrast between her bright, bubbling personality and the dark, brooding quality of some of her tracks on Drive. Says Bic; “I keep my morbid side to myself, but that tends to be the side of me that writes the songs”. There is nothing one-sided about Drive however. These eleven tracks are proof of a rich, full talent. And this is only the beginning.

Discography
[See all at Amazon]