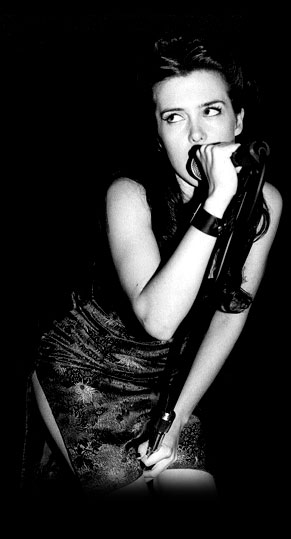 A captivating theme for a collection of “Blue Velvet” style songs which dwells upon the alter personality of singer, Colleen Duffy.

In her debut CD, The Queen Of Pain, Colleen transforms into Devil Doll, who smoothly blends the musical and songwriting influences of an abrasive but forthcoming Joan Jett, with the sexy emotional appeal of a 1940’s vixen. This eclectic blend of rock and blues with a splash of pop appeal will surely grab any listener’s attention. It is this unique potion that forms the platform of the Devil Doll philosophy: “Be what you want and never be a victim.”

This philosophy is found in three of the singles with reflections captured in songs such as St. Christopher, Things You Make Me Do and King of Brooklyn. Devil Doll has already made a huge impact on audiences on both the East and West coasts and will continue the progression internationally next year. The music video for St. Christopher begins shooting in September of 2002. Devil Doll will also be showcased at the 2002 Radio Music Awards Mega Blast in Las Vegas later this year.

Often described as the next up and coming female music sensation, Devil Doll’s Queen Of Pain will take one on a fascinating inner journey into love, rejection and the inner conflicts we must all face and contemplate. The question lies not within the content of the songs but in the willingness you have to explore that side of you.

Devil Doll has put sex back into rock and roll. The return of Eve is coming…

[Return of Eve]
[Queen of Pain]

1 comment for “Spotlight on: Devil Doll aka Colleen Duffy”