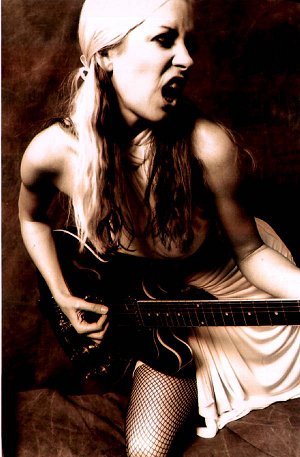 Granddaughter of a trucker and a coal miner, Emily Zuzik hails from the Southwestern Pennsylvania town of Greensburg. She gave her first public performance singing Dolly Parton’s “9 to 5” to her fifth grade religion class in Catholic school. By eighth grade, she was performing original work in front of her school. And the rest, as we say, is history…

Named a to-be-watched “Girl Underground” by Women Who Rock Magazine, Emily Zuzik released her solo debut, “The Way It’s Got to Be,” on Mother’s Discontent Music in February 2003. The multi-range singer has wowwed audiences with her dynamic performances, strong voice and catchy rock songs. Watch out for her first video later this summer for her first single, “That’s The Way.”

“All I really wanted to say was that your live show absolutely rocks, completely…electronic accompaniment or not, you have ‘it’, whatever ‘it’ is…the stage presence, an amazing voice, and all the talent to carry it off.”–Holly Figueroa, Cake Records recording artist and founder of Indiegrrl.com

Read reviews of:
[Way it’s Got to Be]

← Album Review: Everything That You Are by Mook
Album Review:No Passing Zone by Frances Mai-Ling →