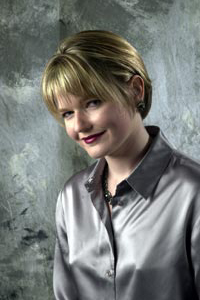 Singer-songwriter Leslie Berry is often described as “progressive pop.” But upon closer listen, you hear many influences in her music. Atlanta’s Creative Loafing describes her music as “modern songwriting with elements of classical and folk that simmers with an understated unrest.” Southeast Performer described her self titled debut CD as “Paula Cole in a polite catfight with Tori Amos,” calling the project as a whole “a well produced adult contemporary showcase.” The Hickory News says that Leslie “drives a mean piano.” All of these ingredients are what have made Leslie Berry a promising new artist on the Southeast music scene.

Originally from the metro Atlanta area, Leslie has been playing and singing in ensembles for twenty-two years. She holds a degree in music performance and has appeared with symphony orchestras, the Spartanburg Repertory Company, Theatre Converse, and at the Brevard Music Center. Fact is, “eclectic” could be a middle name for this classically trained artist, whose performances might include covers from The Rolling Stones to Joni Mitchell to Billy Joel. Add in her original songs and those of partner David Berry, and the mix just keeps getting broader. David, whose writing has received national recognition and was described by Billboard as “well crafted” and “solid,” often accompanies Leslie on guitars and synthesizers.

Leslie Berry has appeared at such notable venues as The Handlebar, Coffee Underground, Red Light Cafe and Eddie’s Attic, and was a featured artist on Oprah Winfrey’s Oxygen Network Tank Tour. She has performed at many festivals and conferences across the Southeast as well, such as Cape Fear Folk Fest, First Night Asheville, Spring Fling in Spartanburg, and Brown Bag Lunch in downtown Marietta, GA. She is a performing member of Indiegrrl and Just Plain Folks, both organizations founded to promote independent artists. Leslie is also a member of DryRidge Productions, a non-profit organization promoting acoustic music in Upstate S.C. Her second CD, No Cinderella, was released in May, 2002.

Read review of:
[No Cinderella]