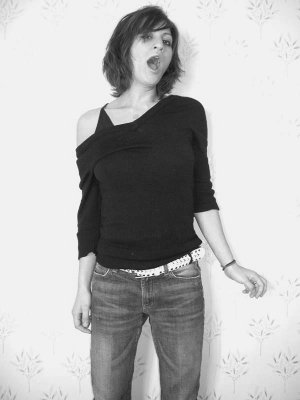 Don’t be too surprised by the musical variety heard in Martina’s music. She is amulti-talented artist who takes the time to make her own guitars and her own clothes, as well as her own music, which is her primary focus.

One of the many outstanding talents that Martina possesses, and that she remains very modest about, is the construction of her own guitars. “Building my own guitars has given me an intimate relationship with my instrument. I don’t know if it sounds better than other guitars, but I sure love it more than other guitars.” She also enjoys spending her time sketching and focusing on visual art. “I consider art as important to me as my music.”

Performing on stage with only the accompaniment of a drummer, Martina plays both piano and guitar, switching from one instrument to the next throughout her set.

Her interest in the guitar began at age 11. At 15 she began writing her own music and performing it for others. She has already played at numerous festivals, including SXSW in Austin, Texas, The Edmonton Folk Festival, and has opened for such acts as Sarah Harmer, The Be Good Tanyas, Hawksley Workman and Billy Bragg.

As a songwriter, she says, “I feel very satisfied with myself, and my songs, when a listener tells me they understand exactly what I mean. Ideally, I want people to just enjoy the melody and relate to my sentiments.”

Read reviews of:
[The Cure for Bad Deeds]