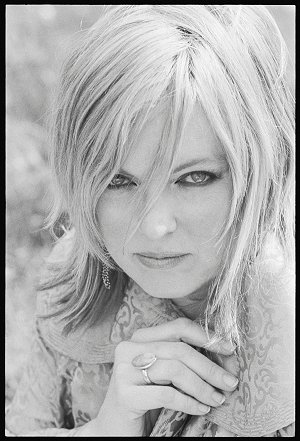 With a flamboyant twang achieved through a blend of uncalculated southern eavesdropping and California coastal wallowing, Patria Jacobs’ songs are built around piano, guitar, bass and drum. They are songs are an eclectic collection of pop, dirgy ballads and country flavored songs.

Texas born, this California dwelling songwriter reveals her nicotined chicory roots through her lyrics while her voice maintains a metropolitan nuance that betrays her wanderings. Patria Jacobs lyrics don’t just sound Southern, they are. Patria currently resides in Los Angeles but she was born in Houston, Texas and spend her early years in places like Waco and New Caney, Texas. As soon as the clock struck “legal”, Patria moved to San Francisco where she joined her first band, The Startles but Patria is probably best known as the singer and principal songwriter for the dreamy, atmospheric pop-rock band, Rubyfish, and band that flourished in pre-hype Silver Lake, California.

After returning to the South and living in Hot Springs, Arkansas for almost a year, Patria found herself obsessed with the Southern dialect, and begun eavesdropping and taking rabid notes. Since returning to Los Angeles, Patria recently revealed her southern and twisted lyrics on her first solo release, the spoken work/rap/groove Do the Pink remix project. Co-produced by Stew, Doten and Patria, Do the Pink has seven versions: remixes by Cheeba, Stew, The Mighty One, Doten/TrendComa and Pickles. The various mixes cross electronic, dance funky, low-rider and pop ground. The Cheeba mix featured an animated flash video which can be found at http://www.dothepink.com/video.html

For the past two years Patria has performed live around LA and collaborated with various musicians. Patria’s collaborations with Stew (Negro Problem) and Doten (Double Naught Spy Car) ultimately led to the recording and co-production of her first full-length solo record, Poison of the Sea which will be released on June 14th.

Read reviews of:
[Poison of the Sea]

Streaming Audio clips:
Hurricane
Stayed Away Too Long
When You’re Down
Tunnel of Delight – alternate mix

← Interview: Janie Price (aka Bird)
Album Review: Song Inside Me by Michele Lundeen →