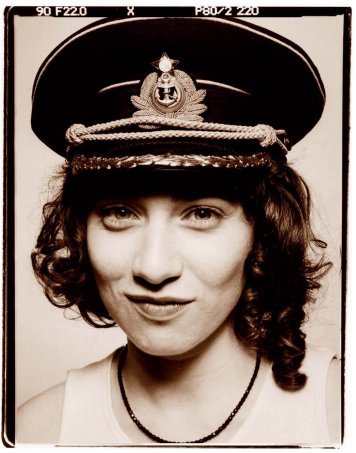 Born in Moscow, CCCP, (in the Year of the Monkey; so I’m guessing 1980).Regina came to the Bronx when she was 9 years old. She started studying classical piano at the age of six, and loved her teacher, but had to say goodbye, and her family had to sell the piano, right before their immigration. She badly wanted to continue her lessons when she got to America, and thanks to her piano teacher, Sonia Vargas, she was able to. Sonia was a Manhattan School of Music Professor, and her husband Samuel Marder, a NY Philharmonic violinist. They had invited Regina’s family for a lunch and a free concert before their tour to Spain. After playing with their four cats and two dogs, Regina approached Sonia and asked, “Will you be my teacher?” Her mother, a music historian and theorist, turned an embarrassed red, knowing the family had no piano or money for lessons. Sonia said “Of course!” and went on to teach Regina for years, her and her husband becoming like family.

In 1998, she left the Bronx for the conservatory of music at SUNY Purchase. There, she met lots of wonderful and talented people, and was inspired by the school’s art scene. Many of the kids she met there were associated with the Lower East Side Anti-Folk scene. Regina played her earliest NYC shows at Sidewalk Cafe, and made the Anti-Folk world her home.

Ever since graduating Purchase in 2001, Regina has played hundreds of shows around NY. She ran away to France for a summer, and Switzerland for a spring where she also performed to rapt audiences. In NYC she has played at The Living Room, Tonic, Knitting Factory, Joe’s Pub, Fez at Time Cafe, The Bowery Ballroom, CB’s Gallery, Makor, and of course Sidewalk Cafe. In the fall/winter of 2003 she had the opportunity to open for the Strokes for their U.S. tour playing in front of thousands of music fans a night.