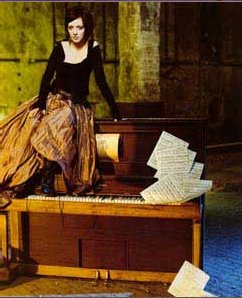 Like many other female performers I have recently become aware of, I learned of Sarah Slean through an Internet mailing list. There were so many people that just gushed about her so I surfed on over to her web site.

It just so happens that at that time they were offering an MP3 file to download for free to get a taste of her music This wasn’t just a 30-second clip either, (at last check it was gone but “High” is still there, however has been made into a 30-second clip. One more disadvantage of her new website design…sorry I don’t care for it at all) this was a whole 5 minute song, called “Twin Moon” I downloaded it (and in fact had to also download the MP3 player since this was my first MP3—which I did at the now defunct mp3.com.

Well, I wasn’t prepared to be overcome as I was by the sound coming out of my monitor! I am not talking about the quality of the MP3 as a beast itself (which is very good, but another story) but the song was so mesmerizing. I couldn’t stop listening to it and wondered if this young woman had put me in a trance.

It is the kind of song that just washes over you. Reminiscent of Sarah McLachlan’s earlier stuff with all the layers (the stuff I prefer over her latest efforts, but that too, is another story) with a little Tori Amos thrown in. Not the Tori that Johnny Rotten once described as “Kate Bush with a knife”, but the sweet lyrical, ethereal Tori.

So I went right away to the ordering page and ordered her EP called “Universe”. It arrived a few days later in a big folder with a newsletter and a signed poster that said, “Hey Amy! Happy Listening- Thanks- Sarah Slean”.

I popped it into the CD player (I was in the car on my way back to work) and I was so very happy that “Twin Moon” was not a fluke. Although “Twin Moon” is not on this EP (It is on her follow up CD, “Blue Parade”) there are many other songs that are equally as entrancing. The jewel card lists 6 songs but don’t turn it off after the sixth song or you will miss two of the best hidden tracks ever recorded. One is called “John 23rd” and she also does a killer cover of Radiohead’s “Climbing Up The Walls”. Being a huge Radiohead fan (as I am told she is as well) this was a very welcome surprise for me.

Her piano playing is exceptional and her voice is so beautiful I can’t really describe it except to say that she reminds me a little of Tori Amos, and Sarah McLachlan all wrapped in to one and that is a very nice gift.